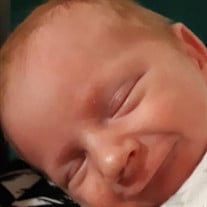 Wyatt Jordan King, two months old, of Columbus, passed away Saturday, June 15, 2019, at Columbus Regional Hospital. Wyatt was born April 4, 2019, in Indianapolis, the son of Katie King and Zachary Ketner. He was greatly loved by his mother, big brother, as well as the rest of his family. Wyatt was a gift from God that filled the void left in Katie’s life that was left after her brother Jordan’s passing in 2016. The funeral will be at 1:00 p.m. Tuesday, June 25, 2019, at the Jewell – Rittman Family Funeral Home with Dave King officiating. Visitation will be from noon until time of services. Burial will be at Garland Brook Cemetery. Survivors include his mother, Katie King of Columbus; his father, Zachary Ketner of Columbus; a brother, Xavier Allen King of Columbus; a half-brother, Dylan Ketner of Columbus; grandparents, Dave and Terri King, and Sondra Powers, all of Columbus; great-grandparents, Lucy Neal and Lola Isley, both of Columbus; and uncles, Jeremy (Liz) King of Indianapolis and Chris King of Columbus. He was preceded in death by his uncle, Jordan King; as well as great-grandparents, Chet Neal, Melvin King, and Earl Callam.

The family of Wyatt Jordan King created this Life Tributes page to make it easy to share your memories.

Send flowers to the King family.