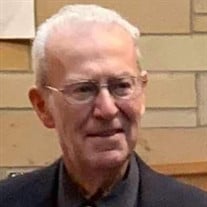 William “Bill” D. O’Connor, 85, of Columbus, passed away on Ascension Day: May 21, 2020 in Greenwood, IN. Bill was born on June 15, 1934 in Champaign, Illinois, the son of Joseph and Wilma Lynch O’Connor. He was born again in the waters of Holy Baptism as an infant, and was a child of the Heavenly Father his entire life. He was a member of Faith Lutheran Church in Columbus. He married M. Diane Nordman on June 27, 1964. Bill was a U.S. Navy veteran. He was employed as an Engineering Inspector for both SIECO, Inc. in Columbus and Commonwealth Engineering Company in Greenwood. Bill played trombone in the Navy band, and while in the Navy he attended the School of Music in Cambridge, Maryland. He continued playing the trombone in church throughout his life. He loved listening to the music of trombone virtuosos Urbie Green and Carl Fontana. Bill also enjoyed the music of Glen Campbell, greatly appreciating his ability on the guitar. He was a basketball fan, cheering for both I.U. and Purdue. Oscar Robertson and Larry Bird were his favorite players. He used to love to watch the “old” Bob Knight Show. Bill was a committed family man. Nothing pleased him more than rebounding shots or playing catch with his sons. He was a devoted fan of his grandchildren, and he loved watching all of their activities. Bill was hard working. He was a humble man and not comfortable with attention. He was a veritable treasure trove of “old school wisdom,” which he spent his entire life sharing with his family. Bill is survived by his loving wife of 55 years: Diane; sons Wm. Daniel (Kelly) O’Connor, of Greenfield, IN; Pat (Ame) O’Connor, of Scipio, IN; and Darrin Joseph (Natalie) O’Connor, of Columbus; grandchildren: Meredith, William, Christopher, Ashley, Michael, Patrick, Haylee (Lucas), and Bailey (Evan); great-grandchildren: Matthew and Mackenzie; and an abundance of cousins. Bill was preceded in death by his parents, as well as many aunts and uncles who were very dear to him, especially his Aunt Margie Lynch. Funeral services will be at noon on Tuesday, May 26, 2020 at Faith Lutheran Church in Columbus, with burial taking place immediately after at Garland Brook Cemetery. The Rev. Todd Riordan and the Rev. Bill Stache will officiate. All are invited to view the funeral service on Facebook Live through Faith Lutheran Church’s Facebook page. Military rites will be performed at the gravesite by the Bartholomew County Veterans Honor Guard. Viewing will take place before the funeral service, starting at 10:00. Memorials may be made to Our Hospice of South-Central Indiana; Faith Lutheran Church of Columbus; and/or the pro-life charity of the donor’s choosing.

The family of William "Bill" D. O'Connor created this Life Tributes page to make it easy to share your memories.

Send flowers to the O'Connor family.