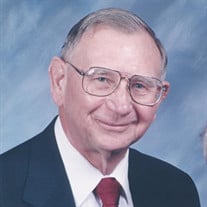 William “Frank” McCullough, 89, of Columbus, IN, died September 11, 2021 at Four Seasons Health Center. Frank was born March 30, 1932 to William and Hannah Alice (Voorhees) McCullough in Lyon County, Kansas. He graduated from Americus, Kansas High School in 1949 and began his college education in Kansas State Teachers' College, Emporia, Kansas. Frank enlisted in the U.S. Navy during the Korean War and served four years active duty, most of it near Yokohama, Japan. He was thankful for his navy experience, both for the opportunity to serve his country and because it was while in Japan that he accepted Jesus Christ as his personal Savior and Lord under the ministry of a godly chaplain and the influence of a faithful friend. After completing active duty, Frank continued his college education, where he met Anna Dora Krosky, who would become his godly wife on June 7, 1958. They enjoyed 58 years of marriage until her death September 18, 2016. Frank was an organic chemist, specializing in pesticide residues in foods and related products. After thirty years with the US FDA in Kansas City and Buffalo, NY, he joined Analytical Biochemistry Laboratories in Columbia, Missouri. Anna Dora and Frank helped establish an independent Baptist Church in Columbia. When the church built their own building, Frank retired from ABC to be the volunteer janitor. He always said it was the best job he ever had and he was paid exactly what he was worth. In 2001, Anna Dora and Frank moved to Columbus, IN to be near family. Frank is survived by his children, William “Scott” (Anna) McCullough; Mary (Robert) Sipla; and Paul (Christine); his nine grandchildren: Tyler Sipla, Kathryne Sipla, William “Graham” (Ellie Sheridan) McCullough, Abraham (Shelly) McCullough, Peter McCullough, Lydia (Joshua) Cossin, Grace McCullough, Joshua McCullough and Hannah McCullough; several nieces and nephews; and his “adopted” grandkids, the staff at Amazing Joe’s Grill. Frank was preceded in death by his wife, Anna Dora, his parents, and his three sisters, Edith Brown, Bessie Carson, and Wilma Carson. Visitation will be from 5pm – 7pm on Thursday, September 16, 2021, at Jewell-Rittman Family Funeral Home, 3855 25th St, Columbus, IN. Services are at 1pm on Friday, September 17, 2021 at First Baptist Church, 3300 Fairlawn Dr, Columbus, IN, with visitation one hour prior to the service. Burial will be at Garland Brook Cemetery.The family requests that those attending wear masks. The service will be live streamed at https://www.firstbaptistcolumbus.org/video. In lieu of flowers, memorials may be made to: Coyote Hill Children’s Home (9501 W Coyote Hill Rd, Harrisburg, MO 65256); Our Hospice of South Central Indiana (2626 17th St, Columbus, IN 47201); or First Baptist Church of Columbus, where he was a member. Online condolences may be made at https://www.jewellrittman.com.

The family of William Frank McCullough created this Life Tributes page to make it easy to share your memories.

Send flowers to the McCullough family.