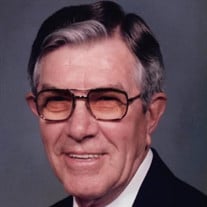 W. Raymond Cooper (October 16, 1924-December 18, 2020) was an exemplary family man who could fix anything and would help anyone. During the 1930s Great Depression, his father, John R. Cooper, was one of the few around with a truck, which meant... View Obituary & Service Information

The family of William Raymond Cooper created this Life Tributes page to make it easy to share your memories.

Send flowers to the Cooper family.