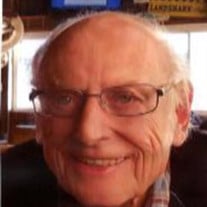 William Michael Buiting, 88, passed away February 19, 2021 in Columbus, IN. William was born to Wilhelmus and Gertrudis (Hoomans) Buiting June 24, 1932 in Deventer, Holland in the Overijssel province. William served in the United States Army from 1956 to 1959, after which he made his home in Wilmington, Delaware. He graduated from the University of Delaware as a Chemical Engineer in 1965. William also received a Masters of Business Administration from Indiana University School of Business in 1986. William has made his home in Midland, Michigan; Ottawa, Illinois; Brownsburg, Indiana and most recently, Columbus, Indiana. William is survived by his wife, Zita (Freyberger) Buiting, two sons Michael (Patti) Buiting, Christopher Buiting and a daughter, Zita (James) Moore. He is also survived by four Grandchildren, Bethany (Christopher) Hologa, Zita Buiting, Brittany (Steven) Rieser and Michael (Macy) Moore. He is also survived by eight great-grandchildren, Atlas Brown, Aries Brown, Zaylee Hologa; Layla Paunetto, Ophelia Moore; Miles Holycross, Sawyer Moore and Lincoln Moore. He is preceded in death by his parents, two sisters Teresia (Trees) and Caterina (Tiny). He is also preceded in death by a granddaughter Sarah Moore. A memorial mass will be held at 10 a.m. Tuesday, March 9, 2021 at St. Bartholomew Catholic Church, 1306 27th St. Columbus, IN 47201. Private entombment will be held at Crown Hill Cemetery, Indianapolis. A live stream of the service will be available at 10 a.m. Tuesday by going to the church’s website: www.saintbartholomew.org and clicking on “Watch Mass Live” Arrangements are entrusted to the Jewell-Rittman Family Funeral Home.

The family of William Michael Buiting created this Life Tributes page to make it easy to share your memories.

Send flowers to the Buiting family.