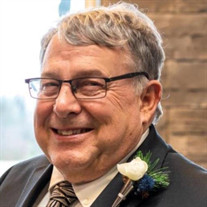 William Leroy Boes, 70, passed away at 3:15 Monday, August 10th, 2020. Bill was born on June 6th, 1950, in Terre Haute, Indiana. Bill loved his family fiecely and nothing made him prouder than going to see one of his grandchildren participating in activities they loved. He was a die-hard IU, Colts, and Columbus East Olympians fan. He was a generous family man who was willing to do whatever it took just to see that those he cared about most did not go without. He was a member of St. Peter's Lutheran Church where he regularly greeted attendees and acted as lector. He was a past member of the Kiwanis, Bartholomew County Homebuilders Association, and Bartholomew County JayCees. He was current President of the Presidential Park Homeowners Association and Secretary of the Columbus Bowling Center church league. Bill enjoyed spending time playing cards, attending fairs, and cooking while using whatever condiments he could find in the refrigerator. Bill had a laugh that would bring the whole room to attention. After retiring from 32 years of service at Kirby Risk Electircal Supply Company, he found adventure and joy in being a driver for Uber and Lyft and "ringman" at his nephew's auction house in Southern Indiana. Bill leaves behind his loving wife of 17 years, Paula Boes; children, Christy (Greg) Eubanks, Cathy (Robert) Jackson, Tim (Lana) Boes, Lisa (Billy) Gray, and Jenn (Kenny) McManaway; grandchildren, Dakota (Haley) and Makena Jackson, Elizabeth Boes, Jordan (Jerracah) Gray, Peyton (Sam) Gray, and Isaiah, Eli, and Amber Eubanks; siblings, Shirley (Reverand Bill) Reed and Tom (Cindy) Boes; in addition to six nieces and nephews, several great nieces and nephews, and his very special furry friend, Hannah, along with nine fur grandbabies. He was preceded in death by his parents, Russell and Norma Boes and brother, Larry Boes. While we will no longer be with him physically, Bill will forever be in our hearts. The visitation will be at Jewell-Rittman Family Funeral Home, 10 a.m. to 2 p.m. Monday, August 17th followed by the service at 2 p.m. and a private graveside ceremony. In lieu of flowers, memorials may be made to The Gideons.

William Leroy Boes, 70, passed away at 3:15 Monday, August 10th, 2020. Bill was born on June 6th, 1950, in Terre Haute, Indiana. Bill loved his family fiecely and nothing made him prouder than going to see one of his grandchildren participating... View Obituary & Service Information

The family of William Leroy Boes created this Life Tributes page to make it easy to share your memories.

Send flowers to the Boes family.