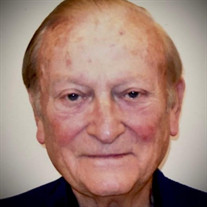 William “Bill” Banister, 92, passed away Saturday, June 5, 2021. He was born on April 15, 1929 in Greensburg, Indiana to parents, Morris Banister and Myrtle Arnold Banister. He spent his childhood and teenage years Greensburg and moved to Columbus in 1950. Bill married the “love of his life”, Theresa “Cleo” Fiddler on June 30, 1950 in Glencoe, Ontario. Bill was introduced to Cleo after a chance meeting in the town of Thunder Bay, Ontario, during a fishing trip in 1949 and it was “love at first sight” for both of them. Together, they have two children, Roger (Jan) Banister and Denise (John) Kocur. Bill worked as a Foreman and General Foreman at Cummins Engine Company until his retirement in 1985. After retirement, Bill pursued the art of violin building, making 51 violins, and later, broadening his talent to craft building mandolins and banjos. He was recognized by Traditional Arts of Indiana as one of Indiana’s treasured craftsmen. Bill loved acoustic music, especially bluegrass and country. He was well known in Indiana bluegrass circles, meeting new friends while making his yearly pilgrimage to the Bean Blossom Bluegrass Festival. Bill actively played rhythm guitar, upright bass and enjoyed singing. He and his children sang bluegrass and gospel trios for the public and in bluegrass jam sessions. Bill was a champion for young bluegrass musicians, always supporting and encouraging them. He hosted many memorable “jam” sessions at Bean Blossom and at his home. His love of fishing was a passion since childhood, often fishing with his brother, Buddy. Bill enjoyed bluegill and bass fishing, but his passion was his annual walleye fishing trips to the remote areas of Ontario. In many ways, Bill was a nature lover, knowing a wide variety of birds, trees, animals and especially bird dogs. He also enjoyed his tomato garden, and growing apples and peaches in his orchard. Bill loved to share stories of life and times of growing up in Greensburg, Alert, and rural Indiana. He also shared many tales of helping his grandfather, veterinarian Dr. Raymod Banister, on vet calls in Bartholomew County. Bill is survived by his wife of 70 years, Cleo Banister; and his children, Roger Banister and Denise Kocur. He also leaves behind grandchildren, Paul (Christine) Banister, Adrienne Cantali, Laura (Josh) Long, and Alison Kocur; and great-grandchildren Cora Banister, Theo Long, and Gwen Long. He was preceded in death by his father and mother Morris Banister and Myrtle Arnold Banister, as well as his brother Buddy Banister. The funeral service will be at 11:00 a.m. Tuesday June 8, 2021 at the Jewell – Rittman Family Funeral Home. Visitation will be from 9:00 a.m. until time of services Tuesday. Burial will be at Garland Brook Cemetery in Columbus Indiana. The family has requested masks and social distancing during visitation. The funeral service also will be live streamed at www.jewellrittmanfamily.com.

William &#8220;Bill&#8221; Banister, 92, passed away Saturday, June 5, 2021. He was born on April 15, 1929 in Greensburg, Indiana to parents, Morris Banister and Myrtle Arnold Banister. He spent his childhood and teenage years Greensburg and... View Obituary & Service Information

The family of William L. Banister created this Life Tributes page to make it easy to share your memories.

Send flowers to the Banister family.