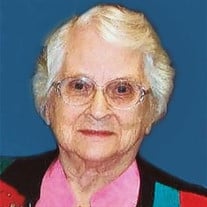 Vera E. Wilson, 91, of Elizabethtown, passed away Monday, December 2, 2019, at Our Hospice of South Central Indiana Inpatient Facility. Vera was born February 23, 1928, in Madison County, Indiana, the daughter of Dale T. and Edna L. Boner Cottrell. She married Paul B. Wilson in 1948, and this past June 26th they celebrated 71 years of marriage. Vera was a member of Wilson Chapel Christian Union Church where she was highly involved throughout her life. She loved spending time with her family, especially her grandchildren and great-grandchildren. Vera is survived by her husband; daughters, Marilyn Davis of Columbus, Coleen (David) Hall of Columbus, and Debra (Steve) Eaton of Grammer; grandchildren, Ashley Davis, Amber Davis, Pamela Hall, Matthew (Lizeth) Hall, Michael (Joanna) Hall, Dale Eaton, Angela Chattin, and Ethan (Kim) Eaton; and great-grandchildren, Nathan Hall, Adylin Hall, Lucas Chattin, and Cullen Eaton. She was preceded in death by her parents; a daughter, Elizabeth Roberts; a sister, Donna Cottrell; as well as her son-in-law, Henry Davis. The funeral will be at 11:00 a.m. Saturday, December 7th, at Wilson Chapel Christian Union Church (9435 State Hwy 7, Elizabethtown, Indiana) with Pastors Doug Sharp and Jon Merrifield officiating. Visitation will be from 4 to 7 p.m. Friday at the church, and one hour prior to the service Saturday. Burial will be at Garland Brook Cemetery. Memorials may be made to Wilson Chapel Christian Union Church.

The family of Vera E. Wilson created this Life Tributes page to make it easy to share your memories.