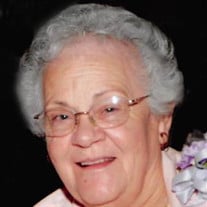 Vera ”Joan ”Murphy, 89, of Elizabethtown, died September 17, 2019 at Willow Crossing in Columbus, Indiana. Joan was born November 7, 1929 in Hancock County, the daughter of Paul Madison and Clara LaVaughn (Moore) Nigh. She married Ernest M. Murphy on February 22, 1948. He preceded her in death on October 27, 2010. Joan was a member of Elizabethtown Christian Church. She had worked for Danners. Joan loved crocheting and collecting gnomes,working with her flowers and cooking for the family. Her family was the love of her life .She attended the grandchildren and great grandchildren activities until she was 87 and she said she had the best seat in the house. The funeral will be conducted at 10:00a.m. Monday, September 23, 2019, at Jewell-Rittman Family Funeral Home with the Revs. Marcus Speer and F. Doran Chambers officiating. Calling will be from 2:00pm to 5:00pm Sunday at the funeral home and one hour prior to the service on Monday. Burial will be at Hope Moravian Cemetery. Memorials may be made to Elizabethtown Christian Church, The Arthritis Foundation, American Lung Association or Donors Choice Survivors include her children: Donald (Terry) Murphy, E. Dwain /Shorty (Kathy) Murphy, both of Elizabethtown, and daughter, Nancy (Ron) Speer of Hartsville; grandchildren, Yancey Murphy, Tara (Dan) Humphreys, Eryn (Travis) Mitchell, Josh (Carissa) Murphy, Marcus (Jennifer) Speer, Andy (Sarah) Speer; great-grandchildren, Daniel, Heidi, & Joel Murphy; Jackson & Carleigh Humphreys, Brady & Wyatt Mitchell, Maggie Wagner, Matthew Murphy, Madelyn, Albany, & Colton Speer; siblings: Bradley Nigh, Donna Smothers & Dorothy Sexton, all of Shelbyville. She was preceded in death by her parents; husband, Ernest; a grandson, Darby O. Murphy; sisters: Frances Hoff, Phyllis James, and Mary Myers; brothers: Charles, Marvin, and Stephen Nigh.

The family of Vera Joan Murphy created this Life Tributes page to make it easy to share your memories.

Send flowers to the Murphy family.