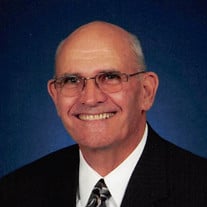 Tommy "Tom" L. Bray, 79, of Columbus, died November 7, 2019, at Our Hospice of South Central Indiana Inpatient Facility. Tom was born January 26, 1940, in Columbus, the son of Morris W. and Lucille M. McClintic Bray. He married Wanda J. Fuller July 31, 1960, at Pendleton, Indiana. He was a veteran of the U.S. Navy and retired in 1995 from the Columbus fire department after 28 years of service. After retirement he was employed with Toyota for several years in their security division. Tom was a life-time member of East Columbus United Methodist Church and was past-president of Evening Exchange. Tom and his wife have been wintering the past 11 years in Lake Wales, Florida. He enjoyed sports, being outdoors, fishing and was a fan of I.U. basketball and the Colts. The funeral will be conducted at 11 a.m. Monday, November 11, 2019, at East Columbus United Methodist Church with Pastor Ann Thomas officiating. Calling will be 9:30 a.m. until time of service Monday. Memorials may be made to East Columbus United Methodist Church or Our Hospice of South Central Indiana in honor of Tommy. Survivors include his wife, Wanda; a sister, Jane Beck of Resaca, Georgia; nephews, Brent (Darlene) Beck of Cohutta, Georgia, Kirk Beck of Calhoun, Georgia, and Todd (Lisa) Beck of Calhoun, Georgia; and a niece, Amy (Scott) Fletcher of Resaca, Georgia. He was preceded in death by his parents brother-in-law, James Beck; and a sister-in-law, Susan Fuller.

The family of Tommy "Tom" L. Bray created this Life Tributes page to make it easy to share your memories.

Send flowers to the Bray family.