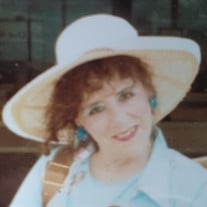 Sylvia Rachel Worton, 89, of Pendleton, Indiana and formerly of Columbus, died February 14, 2022. Sylvia was born December 24, 1932 in Columbus to the late Elda Wheeler and Amanda Wells. In life, Sylvia became an author of several books dedicated to her childhood and the history of Columbus. She was a loving mother and grandmother who was willing to help anyone. She knew no stranger. Sylvia loved animals tremendously; she was also the greatest cook her family ever knew and will be greatly missed by everyone whose lives she touched. She will be greatly missed. A graveside service will be held at 1:00 P.M. Monday February 21, 2021, officiated by Rev. Derek Carpenter at Garland Brook Cemetery. Memorial may be made to the family through the funeral home. Survivors include her son, Tony Worton of Columbus; grandchildren, Tyrum Straks, Chloe Worton and Tonisha Worton; nieces and nephews, Nancy Jane Palmer, Sadie Cress, Mandy Palmer, DeWayne Palmer, Trudy Palmer, Jerry Palmer, Katie Jones, Larry Palmer, Pamela Wells, Betty Wells, and Theresa Wells. She was preceded in death by her son Tommy Joe Wells; brothers, Harley Wells and James Thomas Wells; sisters, Nellie Palmer and Josephine Hewitt.

The family of Sylvia Rachel Worton created this Life Tributes page to make it easy to share your memories.

Send flowers to the Worton family.