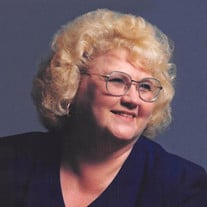 Sylvia L. Graham, 79, of Columbus, went to be with Jesus, at 9:30 p.m. Friday, July 30, 2021 at Our Hospice of Southern Indiana Facility. Sylvia was born December 28, 1941 in Bedford, Indiana, 21345 the daughter of Gilbert and Orpha Collier Fisher. She married Carl Dean Graham on December 16, 1960. He preceded her in death on July 16, 2004. Sylvia graduated from Needmore High School, Bedford and attended Oakland City University, Oakland City, Indiana before retiring after 30 years of service for Cummins Engine Co., Columbus, Indiana as an Executive Secretary. She was a long-standing member of the Rocky Ford Free Methodist Church of Columbus. She and her husband were founding members of the Graham Family Southern Gospel Group. Sylvia was a talented musician, singer and piano player. She and her husband hosted a Gospel music radio show for many years in the Southern Indiana area. A loving sister, mother, grandmother and great-grandmother, Sylvia will be greatly missed by all who knew and loved her. Though Sylvia endured many unexpected challenges in her life, she believed when the world tries to pull you apart, you plant yourself firm in your faith in God and trust that He will bring you through. This strong sense of faith was never more evident throughout her life and was the reason she always told her loved ones, “Everything will be Ok.” Calling will be from 9:00 - 10 a.m. Wednesday with the funeral service following at 10:00 a.m., with Pastor Carey Edgren officiating. Burial will be in Garland Brook Cemetery. Memorials may be made to Our Hospice of South-Central Indiana through the funeral home. Survivors include a daughter, Sherri Graham-Godsey of Columbus; a brother, Rev. Kenneth (Judy) Fisher of Bedford; grandchildren, Brandon (Victoria) Godsey of Columbus and Chris Godsey of Columbus; Miranda Graham of Asheville, North Carolina, Mariah Graham of Pearland Texas, Great-grandchildren, Adam Godsey, Liam Godsey and Elowen Godsey of Columbus, Indiana, and two nephews, Tim (Heather) Fisher and John Fisher, both of Bedford. She was preceded in death by her parents, and her husband, Carl Dean Graham and a son, Mike D. Graham. Services were entrusted to the Jewell-Rittman Family Funeral Home.

The family of Sylvia Graham created this Life Tributes page to make it easy to share your memories.

Send flowers to the Graham family.