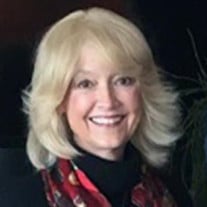 The most beautiful, kind and amazing mother, spouse, sister and friend was called home on June 13, 2020. It was too early; the rest of us wanted to keep playing. Susan Adler was born on December 30, 1951, in Tipton, Indiana, the daughter of Howard and Lucy McIntire Adler. Susan graduated from Sharpsville Prairie High School and then put herself through Purdue University where she played in the band and earned a bachelor’s degree in Sociology and a Master’s degree in Industrial Relations. Following graduate school, she took a job with Cummins Engine Company and moved to Columbus where she would eventually marry Grant Tucker. Susan left Cummins and took a job at Indiana University Purdue University-Columbus as an Academic and Financial Aid advisor for the Nursing School. Susan took a sabbatical from work to nurture and enrich the lives of her children, Ben and Lauren; reading to them, doing crafts and allowing them to explore the world on their many road trips and excursions. Although before deciding to have children, Susan said that she never considered herself to be the “motherly type,” Ben and Lauren could not possibly have had a better mother. Susan returned to IUPUC once she had Ben and Lauren well on their way and finished her professional career there. Born into a farming family that was in the hybrid seed business, Susan said recently that she always considered herself a “person of the ground.” She was a skilled and avid gardener, growing prize-winning vegetables, flowers and herbs. Susan was a long-time member of the Mudlarks Garden Club and held various offices, including President, several times. She cherished the friendships she made with her fellow Mudlarks and enjoyed maintaining the County Courthouse flower beds as well as helping to organize and entering arrangements in the flower shows that the Mudlarks held. Susan went on to be on committees and held offices in the Garden Club of Indiana, including contributing to their newsletter. She looked forward each summer to “Mudlarks Monday” at the 4-H Fair, always winning ribbons for her arrangements and herb entries. Susan was a member of Monday Club and other social and philanthropic organizations, including having been appointed by the County Commissioners to serve on the Bartholomew County Library Board. Susan was a voracious reader of all things, although she especially enjoyed murder mysteries. She joined a monthly book club and enjoyed the friendships that she continued and formed there. She also was a trivia enthusiast, enjoying Jeopardy every night and weekly trivia contests with her friends. You wanted to have Susan on your team. A Celebration of Life will be at 1 p.m. Saturday, June 20, 2020, at Jewell-Rittman Family Funeral Home, Columbus, Indiana, with Celebrant Tracey Carter officiating. Visitation will be 4 to 7 p.m. Friday and one hour prior to the service on Saturday. Burial will be at Garland Brook Cemetery in Columbus. Memorial donations can be made to Our Hospice of South Central Indiana. Susan is survived by her husband, Grant Tucker; son, Benjamin (Jessica) Tucker and daughter, Lauren Tucker; sister, Kathryn (Dwain) Graham; brothers, John (Jan) Adler and James (Marsha) Adler; father-in-law, Randall Tucker; brothers-in-law, Roger (Janet) Tucker and Richard (Mary) Tucker; and several nieces and nephews. Susan was preceded in death by her parents, Howard and Lucy Adler; and her mother-in-law, Evelyn Tucker. Our piece of the world is a better place as a result of the time that Susan spent in it. Let’s honor her memory by using what we’ve learned from her to leave things better than we found them. We invite everyone to visit the Jewell-Rittman Family Funeral Home website, www.jewellrittman.com, to view the video tribute, express your condolences and share memories with the family.

The most beautiful, kind and amazing mother, spouse, sister and friend was called home on June 13, 2020. It was too early; the rest of us wanted to keep playing. Susan Adler was born on December 30, 1951, in Tipton, Indiana, the daughter of... View Obituary & Service Information

The family of Susan Adler created this Life Tributes page to make it easy to share your memories.

The most beautiful, kind and amazing mother, spouse, sister and...

Send flowers to the Adler family.