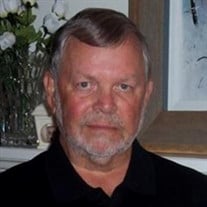 Stephen G. Peck, 77, of Columbus, passed away August 18, 2020. He was born January 16, 1943, in Washington, D.C., to the late Phillips J. and Mary Davis Peck. He married Cassandra Mivec Peck on June 17, 1967, and she preceded him in death on August 22, 2004. He was employed for 32 years at Cummins Engine Company, retiring in 2001 as Director of CEP Systems and Indirect Materials. He is survived by daughter, Monica Peck of Morgantown, WV; daughter, Alison Peck and fiancé, Gary Dinzeo, also of Morgantown, WV; son, Andrew Peck and fiancée, Jennifer Kusachi of Chicago, IL; sister, Mary Jane Peck McKinney and husband, Tyler McKinney of Pittsboro, IN; niece, Melissa Morphew Pickens and husband, Brendan Pickens, also of Pittsboro, IN; nephew, Ryan Morphew of Brownsburg, IN; and dozens of lifelong friends. Memorial gifts have been suggested to AMVETS.

The family of Stephen G. Peck created this Life Tributes page to make it easy to share your memories.

Send flowers to the Peck family.