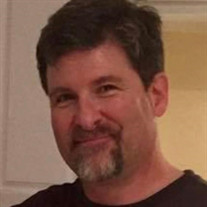 Brad Henderson, 56, of Indianapolis, died at 9:59 a.m., Tuesday, September 28, 2021, at home. Brad was born August 13, 1965 in Terre Haute, the son of John and Brenda Bozell Henderson. He married the love of his life, Rhonda Russell on January 29. 2018. Brad was a Columbus East graduate in 1983. He attended Indiana State and IU. Brad majored in history and was extremely knowledgeable on that subject. Brad’s favorite pastime was spending time with this wife and watching his boys play Ultimate Frisbee. He loved attending all sports activities his sons were involved with. He collected coins, was a lover of music and was very mechanically inclined. Brad will be remembered as a wonderful son. He was a dedicated, loving husband that his wife adored and a devoted father. Brad and Rhonda enjoyed spending long weekends in Columbus with his parents. He will be greatly missed by all that knew and loved him. The funeral will be at 6:00 p.m. Sunday, October 3, 2021 at Jewell-Rittman Family Funeral Home with Rev. Wendy Manley officiating. Calling will be from 2:00 p.m. until service time on Sunday at the funeral home. Memorials may be made to the BCSC C-4 department and Susan G. Komen Foundation through the funeral home. Survivors include his parents, his loving wife, Rhonda Henderson, of Indianapolis; sons, Stephen Conner, Bradley Alexander Henderson and their mother, Carin Henderson, all of Indianapolis; a brother, Kevin Henderson, of Columbus; Uncles, Tom Bozell and Peter Reardon of New York, Bill (Naomi) Henderson of Scottsburg; Niece, Logan (Josh) West of Miami, OK.; great niece, Kailey West of Miami, OK. Services were entrusted to the Jewell-Rittman Family Funeral Home. You are invited to view the video tribute, light a virtual candle and send a message to the family via the funeral home website www.jewellrittman.com.

Brad Henderson, 56, of Indianapolis, died at 9:59 a.m., Tuesday, September 28, 2021, at home. Brad was born August 13, 1965 in Terre Haute, the son of John and Brenda Bozell Henderson. He married the love of his life, Rhonda Russell on January... View Obituary & Service Information

The family of Stephen Bradley "Brad" Henderson created this Life Tributes page to make it easy to share your memories.

Send flowers to the Henderson family.