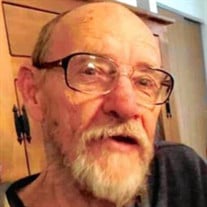 Stanley E. Ostick of Columbus Indiana passed away on Saturday at 8:50pm June 27th, 2020 at the age of 86. Stanley was born in Illinois on May 10th, 1934 to Harvey and Albertine (Townsend) Ostick . He was preceded in death by Donna M. Ostick, John (Jim)F. Ostick, Marilyn L. Ostick (Line), Charlie T. Ostick, and Sally L. Ostick (Eckelman). Stanley is survived and beloved by his only daughter, Eugenia Linn of Cincinnati, OH. and Grandchildren; Kaylon Linn of Danville, Chris Linn of Cincinnati, and Chandus Linn of Indianapolis .He was blessed with three great-grandchild Miles T. Linn, Maisyn M. Linn ,Rudy E. Linn . Stanley was a graduate of Columbus North High School and spent three years at Purdue University at the School of Engineering. After school he turned his mind and talents to the trades. He left his carpentry mark on many buildings around the Columbus, IN area including the former A&W and the Indiana Tool and Die Company buildings. Stanley was a proud veteran and served our nation in the United States Army as a Paratrooper and was drafted during the Vietnam War. More important than any other aspect in his life Stanley was a philosopher and never knew a stranger. He loved to debate politics, our Creator, black holes and the expanses of our universe with anyone who would indulge him. Godspeed Grandpa, "for we are all made of star stuff" (Carl Sagan). Stanley will be interred at Garland Brooks Cemetery in Columbus, IN. Service will be closed to the public with only immediate family present. In lieu of flowers please send donations to a worthy cause of your choice in Stanley's name. As we reflect on the life of Stan Ostick (Stan the man) we are reminded of some of our fondest memories, many of which included poetry such as featured below: Where do we stand in God's great Universe?... Where celestial bodies turn way on a timeless, endless, merry race to this boundless orb. My mind gave chase while working on this fervent task to which my back is bent. I glanced up at the sky and found my thoughts could fly, beyond the words of the day. Only I turned around to find my feet still touch the ground, and reaching for a star- there having thought I have stretched too far. -Stanley E. Ostick

Stanley E. Ostick of Columbus Indiana passed away on Saturday at 8:50pm June 27th, 2020 at the age of 86. Stanley was born in Illinois on May 10th, 1934 to Harvey and Albertine (Townsend) Ostick . He was preceded in death by Donna M. Ostick,... View Obituary & Service Information

The family of Stanley E. Ostick created this Life Tributes page to make it easy to share your memories.

Stanley E. Ostick of Columbus Indiana passed away on Saturday...

Send flowers to the Ostick family.