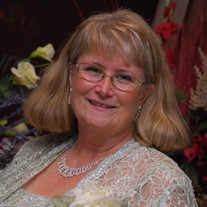 Shelia A. Wade, 73, of Columbus, passed away unexpectedly Friday, January 7, 2022 at Columbus Regional Hospital. Shelia was born in Franklin, IN on May 19, 1948 to Alvin Terry Ellis and Dorothy Elizabeth Rexroat Ellis. She married Don E. Wade on September 29, 1973. Her first job was working the front desk at Benzols Cleaners. Shelia graduated from Indiana Business College and was the first secretary for Ivy Tech State College, working for Mr. Hall. In 1971, she began work at Cummins Engine Company, where she met her husband, Don. Shelia had a burgundy Monte Carlo for sale. Don knew full well he wasn’t interested in the car, but used the car to open the door for conversation, leading to 48 years of marriage. Don and Shelia married on September 29, 1973, at Burnsville Christian Church. They started a family in September 1976, welcoming their daughter Ellen. Sadly, in June 1977, her second pregnancy resulted in the miscarriage of twin boys. In September 1978, their last child, Adam, was born. Shelia left Cummins to be a stay-at-home mom, volunteer at Rockcreek Elementary School and participated in many field trips with the kids. She was a Girl Scout leader and cheerleading coach at Rockcreek for many years. When the kids were in high school, Shelia returned to work outside the home working several temporary jobs. The most interesting being her work in a local law firm. Shelia returned to her specialty as an executive secretary at Cummins in Fuel Systems and Purchasing. She retired after two back surgeries resulting from a traffic accident. She then returned to her work as a stay-at-home mom. Shelia was often second mother to Adam and Ellens friends, welcoming them to her home as if they were one of their own. She was surrogate grandmother to Savannah, Danika and Paislee who were dear to her heart. Shelia was a member of Flat Rock Christian Church where she was very involved in many activities. She loved George Strait, country music, flowers, gardening, her cats and reading. She was especially close to her Grandma Rexroat who taught her to cook, sew and put horse manure on flowers. They would go out to Aunt Elizabeth’s farm and mix manure in a 5-gallon bucket with water and pour the mixture on the flowers every evening. Funeral services will be 10:30 a.m. Thursday, January 13, 2022 at Jewell-Rittman Family Funeral Home with Pastor Brian Ebersold and Pastor Marcus Speer officiating. Calling will be from 5 p.m. – 8 p.m. Wednesday at the funeral home and one hour prior to the service on Thursday. Burial will be held at Garland Brook Cemetery. Memorial contributions may be made to Flat Rock Christian Church Building Fund or Bartholomew County Humane Society. Survivors include her husband, Don E. Wade; a son, Adam E. (Briana Bonnell) Wade of Columbus, IN; a daughter, Ellen M. (Nathan) Cain of Taylorsville, IN; granddaughters, Emma J. Ballard and Brittany N. Dyer; a great grandson, Owen L. Paluch. Shelia was preceded in death by her father, Alvin Terry Ellis; mother, Dorothy Elizabeth Thornberry; step-father, Donald Leon Thornberry and twin sons. Due to the pandemic, masks are required for the visitation and funeral.

Shelia A. Wade, 73, of Columbus, passed away unexpectedly Friday, January 7, 2022 at Columbus Regional Hospital. Shelia was born in Franklin, IN on May 19, 1948 to Alvin Terry Ellis and Dorothy Elizabeth Rexroat Ellis. She married Don E. Wade... View Obituary & Service Information

The family of Shelia A. Wade created this Life Tributes page to make it easy to share your memories.

Shelia A. Wade, 73, of Columbus, passed away unexpectedly Friday,...

Send flowers to the Wade family.