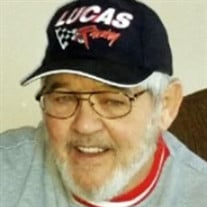 Roger A. Williams, 72, of Columbus, passed away on July 15, 2020. He was born December 2, 1947, at home in Claysville, Indiana, to the late Harold and Hazel (Guthrie) Williams. He married Marilyn Fillenworth Williams on January 28, 1992, in Columbus, and she survives. Roger was employed for 31 years by Cummins Engine Co., retiring in 1996. He served as shop steward and then vice president of the Diesel Workers’ Union in Columbus for 6 terms. After retiring from Cummins, Roger went into business selling NASCAR diecast, clothing, etc. He operated a shop in Fair Oaks Mall as well as a vending trailer, retiring from the business in 2010. He was always a Dale Earnhardt fan and an avid sports fan. He played softball for many years in his hometown area. He loved the Cincinnati Reds and IU basketball. He also looked forward to high school basketball tourney time. Roger loved playing golf and fishing with his friends and just hanging out with his pals talking about the good old days. He looked forward every year to high school tourney time. He just loved watching good basketball. He was a member of Browns Corner Chapel and Sandcreek Conservation Club. He is also survived by his sons, Travis (Kelley) Williams of Salem, and Tracey (Qua-Lynn) Williams of Washington, Indiana, and Chris Herr of Columbus; daughter, Aimee (Marty) Overshiner of Brownstown; brother, Mark Williams of Seymour; sister, Sharon (David) Wiseman of Campbellsburg, Indiana; grandchildren, Tyson, Titan, Liddy, and Kaylea; and great- grandson, Traxton. He was also preceded in death by his son, Trevor Williams; brothers, Harold and Jeff Williams; and infant sister, Carol Williams. A funeral service will be 11:00 AM, Monday, July 20, at Browns Corner Church. Visitation will be 1:00 PM until 5:00 PM, Sunday, July 19 at Jewell-Rittman Family Funeral Home, and one hour prior to the service at the church on Monday. The Reverend Mark Hammel will officiate. Interment will be in Reddington Cemetery.

Roger A. Williams, 72, of Columbus, passed away on July 15, 2020. He was born December 2, 1947, at home in Claysville, Indiana, to the late Harold and Hazel (Guthrie) Williams. He married Marilyn Fillenworth Williams on January 28, 1992,... View Obituary & Service Information

The family of Roger A. Williams created this Life Tributes page to make it easy to share your memories.

Send flowers to the Williams family.