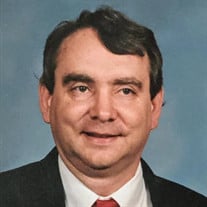 Roger K. Henry, 71, of Columbus, died at 7:50 p.m. August 31, 2020. Roger was born in Scottsburg, Indiana, on July 24, 1949, the son of Virgil Ray and Flora Bingham Henry. He was a 1967 graduate of Hauser High School, a 1971 University of Indianapolis graduate, and a 1995 graduate of IUPUI. Roger was employed as a computer programmer and was a member of St. Paul’s Episcopal Church. Roger enjoyed classic rock music and sports. He especially enjoyed meeting with his high school friends for breakfast each month. The funeral will be conducted at Jewell-Rittman Family Funeral Home on Monday, September 14, 2020, at 4:00 p.m. with Pastor Tim Cox officiating. Visitation will be held one hour prior to the service. Burial will be at Garland Brook Cemetery. In lieu of flowers, memorials may be made to the American Parkinson Disease Association (www.apdaparkinson.org). All visitors are required to wear face masks and are reminded to practice social distancing. Survivors include his former wife, Debbie Henry; son, Nate Henry, and daughter, Rachel (Richard) Chantler of London, England; brothers, Larry (Glenda) Henry and Mike (Sandy) Henry, both of Columbus; and a niece and several nephews. He was preceded in death by his parents and a daughter, Meredith Henry. You are invited to view his video tribute, light a virtual candle and send a message to the family via the funeral home website, www.jewellrittman.com.

The family of Roger K. Henry created this Life Tributes page to make it easy to share your memories.

Send flowers to the Henry family.