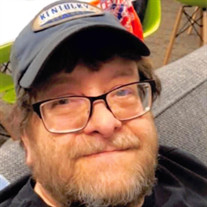 Robert A. “Robby” Web, Jr., 56, of Elizabethtown passed away Thursday December 31, 2020 at Indiana University Medical Center in Indianapolis. He was born January 29, 1964 in Columbus. Robby was a member of the Columbus General Baptist Church for the past 6 years and was in the process of becoming an ordained deacon. He was an avid Kentucky Wildcats fan and loved spending time with his family and grandkids. Funeral services will be held at 1:00 p.m. Wednesday January 6, 2021 at the Jewell-Rittman Family Funeral Home with Brother Bobby Neal officiating. Visitation will be from 11:00 a.m. until the time of the service at the funeral home on Wednesday. Following the service, he will be laid to rest in the Springer Cemetery. Memorial contributions may be made to the Robby Webb Memorial Fund through the funeral home. Due to the COVID-19 pandemic Robby’s funeral service will be live streamed on the Jewell-Rittman family Funeral Home website: www.jewellrittman.com. Robby is survived by his wife, Teresa, whom he married July 24, 2000; his father, Bob Web, Sr.; his sons, Jerry (Deanna) Ainsworth and Jordan (Kensi) Dorrough, both of Columbus; daughters, Clarissa Webb and Jerica (Derrick) Dorrough, both of Columbus; Brothers, Charlie (Shannon) Wyatt and Steve Wyatt, both of Columbus and Jeff Carpenter of Horse Cave, KY; sisters, Brigitte (Doug) Huddleston of Elizabethtown, Lisa (Allen) Anderson of Deputy, Lori Webb of Columbus and Carla (Gary) Richards of Okeechobee, FL; grandchildren, Adrianna Nieves, Claramanni Hogan, Kayla, Olivia, Emma and Joseph Ainsworth, Kelsi and Kohl Dorrough, Tristan and Carson Anderson and Kaden Tindell. Robby was preceded in death by his mother, Polly Wyatt; Step Father, Kenneth Wyatt; Step Mother, Ruth Webb; grandson, Mason Tindell and step brothers, Rondell Wyatt, Jimmy Wyatt and Tim Brooks. Due to the mandate for Covid-19, masks are required and visitors are limited. We appreciate your understanding regarding this matter and encourage friends visit the funeral home website to view his memorial video and sign the online guest book.

Robert A. &#8220;Robby&#8221; Web, Jr., 56, of Elizabethtown passed away Thursday December 31, 2020 at Indiana University Medical Center in Indianapolis. He was born January 29, 1964 in Columbus. Robby was a member of the Columbus General Baptist... View Obituary & Service Information

The family of Robert "Robby" A. Webb, Jr. created this Life Tributes page to make it easy to share your memories.