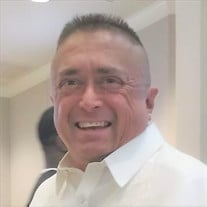 Not sure what to send?

Robert David Lindstrom, 56, of Columbus passed away peacefully in his home on Wednesday, May 4, 2022. Robert was born June 22, 1965, in Angeles City, Philippines. Robert’s parents, Jon and Shirley Lindstrom relocated back to Merrill, WI when Robert was three years old. He was later confirmed at St. John’s Lutheran Church in Merrill. He attended Merrill Junior High School and graduated from Brookfield Central High School in Brookfield, WI. Robert moved to Columbus, IN in 2002, to be closer to his aunt, Sue Lindstrom, and his grandmother, Amelia Lindstrom. Robert worked primarily as a restaurant manager in Columbus, where you may have seen him at the Garlic Tree, Montana Mike’s, Joe Willy’s, Fazolis, and other locations around town. Most recently, he worked in the meat and seafood department at Kroger Marketplace. Robert loved listening to rock and roll music, and jazz music, feeding the birds and squirrels in the backyard and watching classic television shows like MASH and Star Trek in his free time. Most importantly, Robert loved his Green Bay Packers. You would be hard-pressed to find a bigger Packer fan than he. Go Pack, Go! Survivors include his parents, Jon and Shirley Lindstrom, of Lakeland, FL; brother, Michael Lindstrom, and spouse, Neil Heck, of Indianapolis, IN; sister, Mela Krick, of Hastings, MN; son, Robert John Lindstrom, of Texas; two aunts, Kay and Sue Lindstrom; cousins Lee Zirkle and Paul Leopold, of Columbus; nephew and niece, Ty and Nena of Hastings; as well as, his close cousins, Rachel, Savannah, and Grace, of Columbus. He was preceded in death by his beloved grandparents. Memorial contributions may be made in his name to the Bartholomew County Humane Society in Columbus, IN. The family will hold a memorial service at 1:00 p.m. on Tuesday, May 31st with calling hours from 11:00 a.m. to 1:00 p.m. Arrangements are entrusted to Jewell-Rittman Family Funeral Home. You are invited to view his video tribute, light a virtual candle of remembrance, and leave a message of condolence to the family online at www.jewellrittman.com

The family of Robert David Lindstrom created this Life Tributes page to make it easy to share your memories.