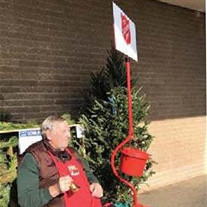 Robert J. Johnson, 71, of Seymour died at 10:18 pm Wednesday, January 8, 2020 at Our Hospice of South Central Indiana Inpatient Facility. Robert was born January 20, 1948 in Columbus IN, the son of Donald Johnson and Mary Robinson Johnson. He married Nancy L. Buescher on November 6, 1972. Robert was skilled in many trades and spent his career as a general contractor. He loved his grandkids and always kept them in line and out of trouble. Robert enjoyed spending time outdoors in the garden and he looked forward to ringing the bell for the Salvation Army each Christmas season. Following Roberts wishes he will be cremated and a memorial service will be held at 2 p.m. Sunday, January 19, 2020 at the Salvation Army, 2525 Illinois Ave. Columbus, IN. Memorials may be made to the Salvation Army Red Kettles Campaign in memory of Robert. Survivors include his wife Nancy, daughters: Mary L. (Kenneth) Sanchez of Columbus and Elizabeth (Curt) Rutan of Columbus, brothers: Gary Johnson of Columbus and Parry Johnson of Washington, grandchildren Kayla Ferrell, Leslie Ferrell, Alexis Suarez, Noah Rutan, Nathaniel Suarez, Sarah Rutan, Caleb Rutan and Jonathan Rutan great-grandchildren Sydney, Mackenzie and Emma Young. He was preceded in death by his parents, son Del Johnson, brothers: Randy Johnson, Dennis Johnson and Christopher Johnson and a sister Cathy Johnson.

The family of Robert J. Johnson created this Life Tributes page to make it easy to share your memories.

Send flowers to the Johnson family.