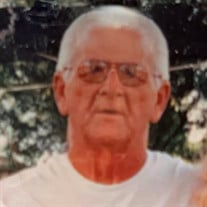 Robert Thomas "Bobby" Jessie, 80, of Tifton, Georgia passed away Monday, December 14, 2020 at Tift Regional Medical Center in Tifton, Georgia. Robert was born March 15, 1940 in Columbus to Marvin Thomas Jessie and Betty Compton Jessie. He was a retired truck driver with Global Van Lines. At Christmas time, he would decorate his truck with so many Christmas lights; he was made to take some off. His truck was named "The Blue Streak". Robert loved antique cars. He and his wife had several. His favorite was a 1955 Crown Victoria "Miss Vicky". Robert was preceded in death by his parents, his wife Dorothy W. Jessie of 49 years at her death in 2011, four brothers, John Thomas, Ronnie Joe, David Ray and Dewey Lee Jessie, and three sister-in-laws, Sharlene Jessie, Jean Jessie and Julia Jessie. His stepmother Brenda Faye Jessie was his caregiver for the past nine years. He lived with her for the last five years when the doctor said he could not live by himself any longer. Robert is survived by his stepmother Brenda Faye Jesse, one daughter Vivian (Ron) Rice of Elizabethtown, Indiana, one grandson Donald Rice and one great granddaughter Paige Rice, both of Columbus Indiana, two sisters Patricia Hutt of Columbus, Sheila Jessie of Florida, two brothers Charles and Glen Jessie both of Florida, one step sister Mary Conley of Georgia, four stepbrothers Bobby Junior, Tony, Kenny and Tim Goforth all of Georgia, and many nieces, nephews and cousins. Graveside services will be conducted at 2:00 p.m. Wednesday, December 23, 2020 at Garland Brook cemetery on Gladstone Avenue in Columbus Indiana. Covid restrictions apply; masks will be mandatory and social distancing required. Flowers will be accepted or donations could be made to Shriner's Hospital for Children or Saint Jude Children's hospital. Jewell - Rittman Family Funeral Home is in charge of local arrangements. Bowen - Donaldson funeral home was in charge of arrangements in Tifton, Georgia. You are invited to send a message via the internet. www.jewellrittman.com

The family of Robert Thomas Jessie created this Life Tributes page to make it easy to share your memories.

Send flowers to the Jessie family.