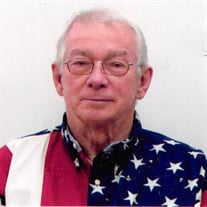 Robert Hanes, 80, of Columbus, died at 10:33 pm, May, 15, 2020, at his residence. Robert was born September 22, 1939 in Houston, Texas the son of Howard “Happy” and Winnie Mae (Pace) Hanes. He married Donna Grubb on April 21, 1987. Donna survives along with their daughter, Holly Piedra of Miami, FL. In December 16th, 1960, Robert married Sandra Klaras of Houston, TX. She survives and their children, Robert Darrell Hanes, Arianna Kane, both of Houston and Mellisa Rannals of League City, Texas. Robert volunteered for duty in Vietnam as a jet engine mechanic during the Vietnam era. He was very proud to serve his country in the Air Force. He was a member of the Texas International Guard, at Ellington Field Joint Reserve Base, where his was a mechanic. Before retiring, Robert worked for Eastern Airlines for 22 years on the ramp, and later, American Airlines for 15 years in purchasing. His pet dogs, Gunner and Bogart held a special place in his heart along with his cat, Toby Keith. Grandchildren that also survive him, Tanner Rannals, Cody Rannals, Nicholas “Nick” Hanes, Garrett Hanes, all of Texas, and Alicia Ferrari and Jordan Ravelo, both of Miami, Florida. Memorial donations may be made to the National Pancreatic Cancer Foundation P.O. Box 1848, Longmont, CO 80502 In keeping with Robert’s wishes no services are planned. Arrangements provided by Jewell-Rittman Family Funeral Home. You are invited to view his video tribute, light a virtual candle and send a message to the family via the funeral home website. www.jewellrittman.com

The family of Robert S. Hanes created this Life Tributes page to make it easy to share your memories.

Send flowers to the Hanes family.