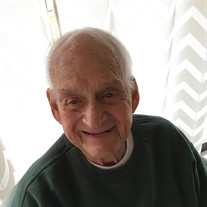 Bob Cookson, rode off into the sunset last Monday evening January 25th. His wife Joyce and four daughters, “the Cookson Girls”, Rindy, Jeannie, Karen, and Kim will miss him dearly, but find comfort in knowing that he is resting comfortably in heaven with all his friends and family that were there to welcome him. Bob was born May 17,1935 to James and Lela (Brown) Cookson. While growing up, on 4th Street in downtown Columbus he spent his days running around town with his brothers Billy and Jack. They would at times climb the fire escape of a building and then travel from rooftop to rooftop above the city. He began working at the age of seven, selling newspapers on the streets and shining shoes. He spent his earnings helping his family during the days of the depression. Riding his horse, Beauty, gave him such joy as a teenager. He rode rodeo at the old corral; barrel racing and trick riding. He loved long rides to Brown County. He also enjoyed going to the races at the 25th Street Race track. Bob met Joyce Smith at the local roller skating rink in 1952 and he was such a nice guy her parents allowed her to begin dating him. Bob’s horse Beauty had passed away by this time and he was riding Blaze and Joyce began riding Sunset. For the next 5 years they rode horses, went to dances, ate at Lucus Brothers and went to see movies at the Crump Theater. In 1957 Bob and Joyce were joined in marriage. Bob and Joyce raised four daughters and were extremely involved in all of their activities; swim team, girl scouts, basketball, softball, horseback riding, cheerleading, etc. He went on camping trips, drove carpools, and sponsored sporting teams. Bob was a loving and caring father. He knew all of their friends and enjoyed getting to know each and every one of them. It might have been while he served biscuits and gravy to the kids from the bus stop or the time someone at a sectional basketball game yelled “Party at the Cookson’s”. He was a friend and role model to so many of his daughter’s friends, they have often heard, ”I just love your dad”. His grandchildren were his pride and joy. He beamed when he saw them and they loved their grandpa. He logged many hours on the bleachers watching football, basketball, and baseball, gymnastics, and cheerleading. He had a more comfortable seat when he watched dance and music recitals. No matter what the event or who was participating, he was there. One of his most favorite things to do though was to set up a bunch of tin cans in the back yard and let the grandkids take target practice with their BB Guns. Bob had been blessed with 13 great grandchildren and has one on the way. They brought him such happiness and joy. He loved it most when they were all together running and playing and laughing with each other. He was so proud. He was a generous person. We have heard many many stories from people he befriended or had helped in one way or another. He would help people buy groceries or just give them money; he would not let anyone go hungry. Bob got a job building the bridge over White River when he was 17. He lied about his age to get the job as you were supposed to be at least 18. That began his working career. He was a carpenter for Repp and Mundt before becoming a Realtor. He sold houses for House and Home, Landmark, and Century 21 real estate offices. He went back to his building trade in the 1980s and retired from Dunlap Construction Company. Bob is survived by his wife of 63 years, Joyce (Smith) Cookson. Daughters: Rin (Jim) Weddle, Jeannie (Brian) Hearne, Karen (Jeff) Sweet, and Kim (John) Clevenger, and his beloved pets Keeta his Alaskan Malamute and Katie his cat. Grandchildren; Jimmy (Kristen) Weddle, Chad (Jessica) Hearne, Kyndal (David) Dixon, Bryce (Cassy) Minor, Jessica (David) Savage, Jessica (John) Meyer, Tyler (Anna) Hearne, Cole Olibo, Jared Sweet, and Loryn Weddle. Great grandchildren: Payson, Teryn, and Aaron Weddle, Archer, Bronson, and Zahna Savage, Charlie Hearne, Reese and Rylee Minor, Harlow Olibo, Norah Jane Dixon, Finn Sweet, Owen and Olliana Meyer, Brother-in-law- Kenneth “Buck” Smith and several nieces and nephews. He was preceded in death by his parents, James and Lela (Brown) Cookson, sisters Almeda Compton and Lorena Richie, brothers Billy Cookson and Jack Cookson, Inlaws Charles and Ethel Smith, Brother-in-law Bill Smith, and grandson Bryan Minor. Funeral services will be provided by Jewell- Rittman Family Funeral Home. Calling hours are Sunday, January 31, from 2:00 pm to 6:00 pm. With the funeral service on Monday February 1, at 10:30 am. In lieu of flowers-donations can be made to the American Diabetes Association or the Bartholomew County Humane Society.

Bob Cookson, rode off into the sunset last Monday evening January 25th. His wife Joyce and four daughters, &#8220;the Cookson Girls&#8221;, Rindy, Jeannie, Karen, and Kim will miss him dearly, but find comfort in knowing that he is resting comfortably... View Obituary & Service Information

The family of Robert L. Cookson created this Life Tributes page to make it easy to share your memories.

Send flowers to the Cookson family.