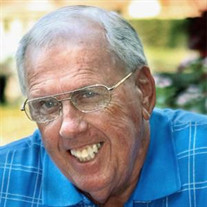 Robert William Sprague, 82, of Sumac Court, passed away on November 10, 2019, at Franciscan Hospice House in Greenwood. Bob was born June 30, 1937, in Columbus, the son of Floyd Earl Sprague, Sr., and Mildred Stigdon Sprague. He married Linda Lou Head of Mooresville, Indiana, on August 15, 1959, and together they enjoyed 60 years of marriage. He was a teacher at Shields Jr. High School in Seymour, Columbus High School, and Columbus North High School where he enjoyed his role as diving coach for the swim team. In 1979 he founded the Robert W. Sprague Insurance Agency specializing in life insurance and annuities. More recently Bob and his wife became concerned for the interests of their fellow seniors and the difficulties they face navigating today’s healthcare system. They felt a calling to devote their time and talents over the past 17 years to helping seniors identify health insurance options most suitable for their needs. Robert was a member and former deacon of First Christian Church and served on the State Board of the American Lung Association in Indiana. While attending Ball State University he joined the Sigma Phi Epsilon fraternity and was a member of the swim team. He received his Master’s Degree in Education from Indiana University. Bob was an avid golfer and an ardent follower of his grandchildren’s sports and school activities as their #1 fan. He was blessed with a wide circle of friends and enjoyed bridge, traveling, and playing with his beloved dog, Jack. A funeral service will be conducted at 11:00 a.m. Friday, November 15, 2019, at Jewell-Rittman Family Funeral Home by the Rev. Steve Yeaton. Calling will be from 4 to 8 p.m. Thursday and one hour prior to the service Friday. Entombment will follow the service at Garland Brook Cemetery Mausoleum. Memorials may be made to Franciscan Hospice House in Greenwood or Love Chapel. Survivors include his wife, Linda; son, Matt (Jennifer) Sprague of Carmel, and daughters, Melinda Huffer of Zionsville and Melissa (Bill) Mahoney of Columbus; brother, Michael Sprague of Nashville; sisters, Saundra (Bob) Grissom of Sarasota, Florida and Carol Foster of Las Vegas, Nevada; sister-in-law, Joan Sprague of Columbus; and grandchildren, Meryn (Jon) Rathert, Patrick Mahoney, Sean Mahoney, Robert W. Sprague II, Austin Huffer and Harry Sprague. He was preceded in death by his parents and siblings, Thelma Sprague, Norman Sprague, Delbert Sprague, Floyd Sprague, Jr., and James Sprague. You are invited to light a virtual candle and send a message to the family via the internet.

The family of Robert "Bob" William Sprague created this Life Tributes page to make it easy to share your memories.

Robert William Sprague, 82, of Sumac Court, passed away on November...

Send flowers to the Sprague family.