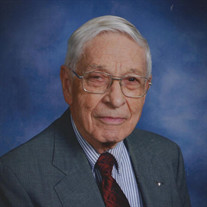 Robert Vernon Bishop passed away May 3, 2022, in Greenwood, IN. He was born in St. Johns, MI, the only child of Emerson and Edna LaRue Bishop. He went to grade school at a one-room schoolhouse. In his youth, he delivered newspapers and milk and worked on his uncle's farm and at a drug store as a soda jerk. He graduated from Rodney Wilson High School in 1945. Drafted into WWII, he served as a surveyor and cartographer in Korea with the 657th Army Engineering. He earned his BA in history under the GI Bill at Albion College and later married Twyla May Savage of Owosso, Michigan on September 28, 1952, and they made their home in Niles, Michigan for 11 years. He began his career with Indiana Bell Telephone Co. as a traveling salesman, selling ads for the Yellow Pages. After transferring to Columbus, Indiana in 1964, he sold telephone systems and was Indiana Salesman of the Year in 1965. He became Account Manager for Cummins Engine Co, Arvin Industries, and Jeff Boat in Jeffersonville. He was active in the local sports scene as a Donner Swim Club Parent, little league baseball coach, a 45-year member of the Columbus North Football Chain Gang, and a stalwart supporter of Columbus North girls and boys sports. He was a member of the Metropolitan Exchange Club, PTA, and the Senior Center. He was a lobbyist for AARP, a voting precinct captain, a long-time blood donor, and an architecture tour guide for the Visitor's Center where he was known for never having to refer to his notes. In 2012 he was interviewed on NPR for a program on Columbus architecture. He was an active member of The Gideons International and First United Methodist Church. Through his church, Bob was involved with the student exchange program, Operation Friendship, and served as a chaperone to Germany and as a host to people from across the world. He was a devoted family man to his four children and 10 grandchildren, loved history and travel, nature, and a well-baked pie. His family, friends, and church family will miss him dearly. Survivors include his children, Marissa Kobylenski (Ken) of Pacific Grove, CA; Scott Bishop (Judy) of Gilbert, Arizona; Carolyn Kamo (Rich) of Greenwood, IN, and Chris Bishop (Shari) of Indianapolis; 10 grandchildren; and 10 great-grandchildren. He is preceded in death by his parents and his wife Twyla who passed away in 2010. Services will take place at 11 am on Wednesday, May 11 at First United Methodist Church in Columbus with Rev. Howard Boles officiating. Following the service, he will be laid to rest next to his wife Twyla in Garland Brook Cemetery. Calling hours are from 5-8 pm on Tuesday, May 10, at Jewell-Rittman Family Funeral Home, and one hour prior to service at the church on Wednesday. In lieu of flowers, the family requests donations to First United Methodist Church, The Gideons International, and Sierra Club. You are invited to view his video tribute, light a virtual candle of remembrance, and send a message of condolence to the Bishop family via the funeral home website: www.jewellrittman.com.

Robert Vernon Bishop passed away May 3, 2022, in Greenwood, IN. He was born in St. Johns, MI, the only child of Emerson and Edna LaRue Bishop. He went to grade school at a one-room schoolhouse. In his youth, he delivered newspapers and milk... View Obituary & Service Information

The family of Robert "Bob" Vernon Bishop created this Life Tributes page to make it easy to share your memories.

Send flowers to the Bishop family.