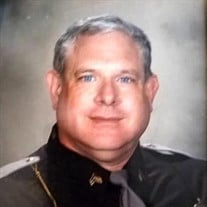 Robert Lee “Robbie” Amos, 66, of Columbus, passed away at 9:18 p.m. April 3, 2020, at Community South Hospital due to Covid-19 complications. He was born September 27, 1953, to the late Maurice “Dale” and Anne Amos of Edinburgh. He married Hallie Jo DeBell on January 1, 2009, and she survives. He graduated high school in 1972 from Leelanau School, a private school, in Glen Arbor, Michigan. In Robbie’s younger days he was a pilot. He then attended several colleges before finding his calling in law enforcement. Robbie served in several different capacities for the Bartholomew County Sheriff’s Department including patrolman, detective, instructor and sergeant. During his last years he served as the Sex, Violent, and Child Predator Registrar. Robbie always found adventure wherever he was assigned during his 38 ½ years serving the public of Bartholomew County. He served his country as a National Guardsman Army soldier at Atterbury becoming an expert cook/chef. He served many meals for the higher ranking officers and events. Robbie was honorably discharged after serving 24 ½ years service. After bring forced into retirement, Robbie had a huge void in his life and needed a purpose. He was invited to be a Reserve Deputy Sheriff of Jennings County, accepting the position of Sex Offender, Violent Offender, and Child Predator Registrar. At times he would write grants for the department and worked at the courthouse during his three and one-half years of service with the department. Robbie leaves behind some of the finest law enforcement officers he would ever know. He served as an instructor at I.L.E.A. (Indiana Law Enforcement Academy) where he was an expert at both driving and shooting a gun. He taught E.V.O.C. (Emergency Vehicle Operations) and advanced E.V.O.C. He was an expert marksman and firearms instructor; he also taught how to assess that someone might be under the influence of drugs or alcohol. Robbie was also an excellent scuba diver and worked with the Search and Rescue Team. Robbie was affiliated with the American Red Cross and the Bartholomew County 4-H Fair Board for several years. He was a Mason from Elizabethtown and a member of Scottish Rite. He had served as an EMT for a short time and volunteered as a firefighter for a few years with Columbus Township Volunteer Fire Department. Robbie helped with cooking the St. Peter’s Christmas day dinner with John Hackman for a multitude of years. A Celebration of Life will take place at a later date at St. Peter’s Lutheran Church with inurnment of cremains at Rest Haven Cemetery in Edinburgh with full military honors and last call by Bartholomew County and Jennings County Sheriff’s Departments. Arrangements provided by Jewell-Rittman Family Funeral Home. The family request in lieu of flowers, please make contributions to the Jewell-Rittman Family Funeral Home, 3855 25th Street, Columbus, IN, 47203, to help with final expenses. Survivors include; his wife of 11 years, Hallie; children, Jeremy (Christine) Amos of Mooresville, Nichole (Benjamin) Scott of Hope and Chris (Gwin) Amos of Columbus; stepchildren, Casey Ashton of Toronto, Canada, and Caitlyn Douglas of Columbus; all four sisters, Jackie Amos-Bowen and Debbie Amos-Cook, both of Elk Rapids, Michigan, Sandy Amos-Freeman of Northbrook, Illinois, and Connie Amos-Carpenter of Des Plaines, Illinois; and grandchildren, Cameron and Carter Scott, Justin and Cody Amos, Darian Amos, and twin granddaughters, Amelia and Grayce Douglas. He is also survived by many nieces, nephews, great-nieces and nephews, and cousins. He was preceded in death by his parents. We invite everyone to visit the Jewell-Rittman Family Funeral Home website, www.jewellrittman.com, to view the memorial video for Sheriff Deputy Robbie Amos, express your condolences and share memories with the family or an individual.

The family of Robert L. Amos created this Life Tributes page to make it easy to share your memories.

Send flowers to the Amos family.