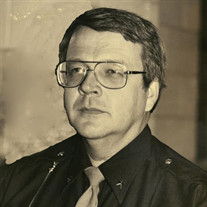 Rick Lynn Hill, 74, of Columbus, passed away peacefully at his home surrounded by his family on February 28, 2021. He was born on April 8th, 1946 in Columbus, Indiana to Mr. L.B. and Lorraine E. Perry Hill of Columbus, Indiana. Rick attended Newbern Elementary School, in Newbern, Indiana and graduated from Columbus North High School in 1964, where he was a member of the Track and Field team. After high school, Rick majored in Teacher Education at Ball State University, in Muncie, Indiana. While in college, he worked on the weekends for Hill’s Salvage, located on US 31 in Columbus and also for one summer for Cummins Engine Company at Plant 1 in downtown Columbus. Rick was a Veteran of the United States Air Force, attending Basic Training at Lackland Air Force Base in San Antonio, Texas and later serving at Bakalar Air Force Base in Columbus, Indiana. In 1969, Rick became a Deputy with the Bartholomew County Sheriff’s Department being hired by Sheriff Charlie Nolting. Rick attended the Indiana Police Academy in Pendleton, Indiana and rose through the ranks to the attain the rank of Major in the Sheriff’s Department before transferring to the Columbus City Police in 1981, where he continued to serve his community as a Patrol Officer. On November 4th, 1986 Rick was elected to the Office of Bartholomew County Sheriff and sworn into Office on January 1st, 1987. He headed the Sheriff’s Department during the design, construction and transition of the department from the former jail location on the courthouse square to the new modern facility located at 543 2nd St. Following Rick’s tenure as Sheriff, he built a successful American Family Insurance agency with his wife Lisa in Greensburg, Indiana, from which he retired in 2009. In 2018, Rick returned to law enforcement serving as the Hartsville Town Marshall until November, 2020. Rick is a member of Camon Masonic Lodge #343 in Hope. as well as the Murat and Scottish Rite Free Masonry Organizations of Indianapolis, Indiana. Rick has been a lifelong automotive enthusiast, starting at an early age by helping his father work on their own family Chrysler automobiles, and later working for his brother Jim’s auto salvage business, Hill’s Salvage. He loved bluegrass and blues music particularly B.B. King and Eric Clapton. Rick loved traveling to the beach with his wife Lisa and their family. He and his wife renewed their wedding vows while visiting St. Pete Beach in 2012. Rick owned, maintained, and restored an amazingly long series of exciting cars throughout his career including his prized MOPARs, particularly his Plymouth Road Runners and Dodge Chargers for which he is well known throughout the area. Rick is survived by wife Lisa Jo Hill (Trobaugh), siblings Carroll Snider, Alice Mae Jones; as well as his four children, Gregory Lynn Hill (wife, Sonia, grandchildren, Ciara Morgan, Hayden Hill, Amelia Hill and Hudson Hill, Dustin Rick Hill (partner, Brittany Heitz, grandchild Kennedy Hill), a daughter Amber Nicole Mudgett (Hobbs-Hill) (Spouse; Shawn, grandchildren; Devon, Gavin) and BethAnn Lynn Hill (grandchild, Braelynn Jo Hill), all of which he loved with all his heart and mentored throughout their lives. He is also survived by his mother-in-law Annadell Trobaugh; as well as his dog Hiko, and several neices and nephews. Rick was preceded in death by his parents as well as brothers Bennie, Jack, and Jim Hill. Friends wishing may make memorials donations to Lisa Hill to be privately disbursed. Funeral services will be at 1:00 p.m. Friday March 5, 2021 at the Jewell - Rittman Family Funeral Home with Rev. Ancel Harden officiating. Visitation will be from 3:00 until 8:00 p.m. Thursday March 4, 2021. Visitation will also take place one hour prior to the funeral service Friday. Burial will be at Garland Brook Cemetery with the Bartholomew County Veteran’s Honor guard performing Military Rites. The Jewell ~ Rittman Family Funeral Home would like to thank everyone in advanced for wearing masks and practicing social distancing while attending gatherings.

Rick Lynn Hill, 74, of Columbus, passed away peacefully at his home surrounded by his family on February 28, 2021. He was born on April 8th, 1946 in Columbus, Indiana to Mr. L.B. and Lorraine E. Perry Hill of Columbus, Indiana. Rick attended... View Obituary & Service Information

The family of Rick L. Hill created this Life Tributes page to make it easy to share your memories.

Rick Lynn Hill, 74, of Columbus, passed away peacefully at his...

Send flowers to the Hill family.