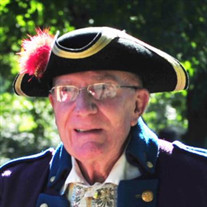 Richard J. Yeaton, 86, of Columbus, passed away August 20, 2020, at St. Franciscan Health after a brief illness. Richard was born April 27, 1934, in Lynn, Massachusetts. He graduated from Lynn English High School in 1951, and went on to graduate from Cincinnati Bible Seminary in 1955. Richard is survived by his wife of 35 years, Connie; sons, R. Thomas (Tammy) Yeaton of St. Louis, Missouri, Douglas M. Yeaton of Georgetown, Indiana, and Mark A. (Sherry) Yeaton and Stephen A. (Cindy) Yeaton, both of Columbus; stepson, Bert (Tina) Garriott of Seymour; along with several grandchildren and great-grandchildren. He served in the U.S. Army from 1957 to 1959. His ministry began in 1960 as an associate minister with First Christian Church, Columbus, Indiana. He served ministries in Carmel, Wanamaker, Mooresville, Ogilville, Burnsville, and Edinburgh, Indiana from 1968 to his retirement in 1999. He was a Mason, belonging to St. Johns Lodge #20 in Columbus. Mr. Yeaton served as a chaplain with the Carmel Police and Fire Departments and Columbus Fire Department for many years and was a colonel (chaplain) with the Indiana Guard Reserve retiring in 2009. He was preceded in death by his parents, Harry and Edith Yeaton; brothers, E. Bruce Yeaton, Ronald A. (Margaret) Yeaton and sisters, Irma (Henry) Yelverton, Lois (Bert) McDonald, Ruth (Elmer) Gillette; several nieces and nephews; and a grandson. Due to the pandemic, a private family service will be held at Garland Brook Cemetery on Monday, August 24, 2020, with military honors presented by the Bartholomew County Veterans Honor Guard. Memorials may be made to Samaritan's Purse, P.O. Box 3000, Boone, North Carolina, 28607, in memory of Richard.

Richard J. Yeaton, 86, of Columbus, passed away August 20, 2020, at St. Franciscan Health after a brief illness. Richard was born April 27, 1934, in Lynn, Massachusetts. He graduated from Lynn English High School in 1951, and went on to graduate... View Obituary & Service Information

The family of Richard John Yeaton created this Life Tributes page to make it easy to share your memories.

Send flowers to the Yeaton family.