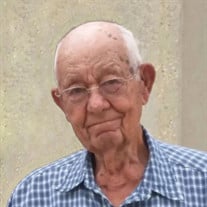 Richard Mann Sr., 93, of Columbus, died at 11:06 a.m., March 3, 2020, at Our Hospice of South Central Indiana. Richard was born December 28, 1926 in Lebanon Junction, Kentucky, the son of Andy Mann and Rosa (Kappel) Mann. Dick’s mother died when he was two years old. His dad then married Elda Cook in Columbus. His dad died when he was 14 and his stepmother continued to raise him and love him as her own along with her own children; Velma, Nellie, Jack and Joanne. As a very young man, Dick passed papers (at one time had three routes) and bussed dishes up until his senior year of high school. He played football for Columbus High School. Dick worked on a section gang for Penn Railroad in the summers of 1943 and 1944. After graduating with the class of 1945, he joined the Navy in November of 1944. After his discharge, he returned to Columbus. One highlight of his achievements was a 1000 mile bike trip to Canada and back on a single speed bike. Richard worked for Chicago Electric Company as a telephone equipment installer. His first job was at Folsom Prison in Bakersfield, California and moved to Baytown, Texas before coming back to Columbus. He married Marijean Cavanaugh April 6, 1951. They were blessed with two sons, Richard A. Mann, Jr. and James S. Mann. In 1952 Dick entered into an agreement with Clyde Thomas and purchased Thomas Electric Company. He has been an electrical contractor and retail business owner with his wife and two sons continuing to this day. Dick loved the outdoors and was an avid hunter and fisherman. Dick was a loving man and supported his children as well as the grandchildren and great-grandchildren. He attended basketball, soccer, track, dance, tennis and chorus performances until his health would no longer make that possible. His love of family was never more evident than just a few days before his death when he entertained the entire family with stories from his childhood and younger years! This time was filled with laughter and tears and most importantly his enduring love. He was and always will be an example of goodness and honesty for his grateful family. We love you always. The funeral will be at 1:00 p.m. Monday, March 9, 2020, at Jewell-Rittman Family Funeral Home with the Rev. Steve Yeaton officiating. Military Rites will be performed by the Bartholomew County Veterans Honor Guard. Calling will be from 1-4 p.m. Sunday at the funeral home and one hour prior to the service. Entombment will be at Garland Brook Mausoleum. Memorials may be made to the Our Hospice of South Central Indiana. Survivors include Wife; sons, Richard A. (Deena) Mann and James S. (Debbie) Mann both of Columbus; brother, Jack (Pam) Mann of Maryland; step brothers, Mike (Debbie) Brown of Westfield and Bill Brown of Edinburgh; sister, Nellie (Bob) Hoeltke of Columbus; stepsister, Linda Brown of Columbus; grandchildren, Richard A. Mann III, James B. Mann, Ryan Mann and Logan Mann; great- grandchildren, Jaxon Mann, Leo Mann, Loren Mann, Alicia Mann, Ella Mann, Laisha Mann, Nathan Mann, Kaleb Etter, and Lyla Mann. He was preceded in death by his parents; sisters, Mary Jewell Chapple, Alberta Sweat, Inez Doane, Velma Winchester, and Joanne Fields; Arrangements provided by Jewell-Rittman Family Funeral Home. You are invited to view his video tribute, light a virtual candle and send a message to the family via the funeral home website. www.jewellrittman.com

The family of Richard A. Mann Sr. created this Life Tributes page to make it easy to share your memories.

Send flowers to the Mann family.