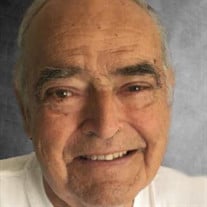 Richard Lee “Dick” Lovelace, 84, of Columbus, passed away March 9, 2022 at Good Samaritan Medical Center, West Palm Beach, FL. He was born in Columbus, IN on May 12, 1937 to Sereno S. Lovelace and Blanche L. Snyder Hendershot. Dick was the owner of Lovelace Electric from 1963 until his retirement in 2000. He enjoyed racing Runabout Boats for many years where he set and broke many state and national records. He was also an avid fisherman and traveler. Funeral services will be at 10:30 a.m. Friday, March 25, 2022 at Jewell-Rittman Family Funeral Home with Pastor Todd Riordan and Pastor Mark Teike officiating. Calling will be from 4 p.m. – 8 p.m. Thursday, March 24, 2022 at the funeral home and one hour prior to the service on Friday. Burial will be held at Vernon Cemetery. A live stream of the funeral service may be viewed at 10:30 a.m. Friday at jewellrittman.com. Memorial contributions may be made to Faith Lutheran Church, P.O. Box 1164, Columbus, IN 47202, Faith Lutheran Church, 810 Cedar St., Clewiston, FL 33440 or Our Hospice of South-Central Indiana, 2626 17th St. Columbus, IN 47201. Dick was married to Cletah Baldwin on August 17, 1957 and she preceded him in death on December 20, 2009. They had a daughter, Shelly L. (Glenn) Wakefield of Columbus, IN and 2 grandchildren and 2 great grandchildren. He married Joan C. Arnholt Boyer in August 2014. They enjoyed a time of love and many adventures. Through this marriage he gained step-children, Beth (Brion) Carter and family, David (Melissa) Boyer and family, Roger L. (Dawn) Boyer and family, they are all of Columbus, IN. He is also survived by a brother, Charles (Janis) Lovelace of Columbus, IN; nephews, Chris (Kara) Lovelace and family of Westfield, IN. and Kevin Lovelace and family of Columbus, IN. You are invited to light a virtual candle and send a message to the family via the internet. www.jewellrittman.com

The family of Richard Lee Lovelace created this Life Tributes page to make it easy to share your memories.

Send flowers to the Lovelace family.