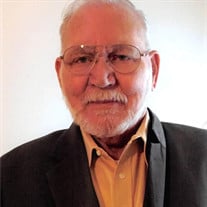 Richard T. Jeffares, 75, of Nashville, died at 10:05 am, Wednesday, January 1, 2020, at Columbus Regional Hospital. Richard was born September 30, 1944 in Atlanta, GA, the son of Johnnie and Mary Nell Jeffares. He married Janice (Worton) Jeffares on January 3, 2004. Richard was the founder and President of P.A.P. Gun Club. Richard was a Sunday School teacher and Superintendent for 18 years for the Columbus General Baptist Church. In his years with the church he was a youth director, pianist and a licensed minister. Richard will be greatly missed by all that knew and loved him. The funeral will be at 10:00 am Tuesday, January 7, 2020 at Jewell-Rittman Family Funeral Home with the Dr. David Jeffares and Bro. Russell Hooker officiating. Military Rites will be performed by the Bartholomew County Veterans Honor Guard. Calling will be from 5:00 until 8:00 pm Monday, January 6, 2020 at the funeral home and one hour prior to the service on Tuesday. Survivors include his wife, Janice; son, Anthony Edward Jeffares, Timothy Edward Jeffares and Richard Dale Jeffares all of Columbus; a daughter, Peggy Jeffares Duncan of Nashville; brothers, David Wayne Jeffares of Lexington, KY., Victor L. Jeffares of Hopeville, GA.; a sister, Leila Holmes of McDonough, GA., grandchildren, Deanna Jeffares, Anthony L. Jeffares, Joshua Jeffares, Dustin R. Jeffares, Tina Marie Duncan, and Thomas Lee Duncan II. He was preceded in death by his parents, a twin brother, Rev. Travis H. “T.J.” Jeffares, brothers, Ronald Jeffares, Alan Jeffares, Larry Jeffares, and Freddie Jeffares.

The family of Richard T. Jeffares created this Life Tributes page to make it easy to share your memories.

Send flowers to the Jeffares family.