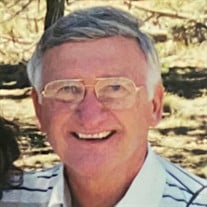 Richard D. Abraham of Columbus, Ind. went home to be with the Lord on Wednesday, January 13, 2021, leaving behind his devoted wife of 41 years, Julie M. Abraham. He was 86. Born to Rev. Paul Wunder and Mary Gleda Abraham on April 19, 1934, Richard was a devoted follower of the Lord Jesus Christ. His love for God was shown through his years as a preacher with the Wesleyan Church and through his many decades of service in Jesus’ name. Richard’s greatest gift was his voice, a talent which took him around the world as he worshipped God in song, and one which he passed down to his son, Paul Richard. One of Richard’s fondest memories in music and ministry was the years he spent directing the Top Teens choir, traveling and recording music with them. He also led a trio with his beloved wife Julie and dear friend Marvin Bettenbrock as they ministered in song as “The Expressions of New Life.” Richard enjoyed camping with his family each summer as they played games and sat by the fire, sharing many happy memories at McCormick’s Creek. In recent years, Richard loved to commune with friends, laughing and telling stories at Bible study with those at Flintwood Wesleyan and at his local McDonalds. Richard also worked for 24 years as the Vice President of Career Consultants, a job which he tackled each day with devotion and skill. But outside of God, Richard’s greatest devotion was his family. Richard leaves behind his wife, Julie M. Abraham; sons Paul Richard (Tabitha) Abraham and Steve (Marcie) Abraham; daughters Janell (Robert) Mountcastle, Lora (Brett) Fathauer and Stephanie (Scott) Riley; siblings Roberta Harrison, Ronald Abraham, Roger Abraham, and Roderick Abraham; and several grandchildren (Mandy, Thomas, Jenna, Jonathan, Heather, Abby, Bryce, Scott, Kyle, Hannah, Cameron, and Tia) and 11 great-grandchildren. Richard was preceded in death by his daughter Jorretta Abraham, parents Paul W. and Gleda, and sister Rita. The funeral will take place at 11:00 a.m. Wednesday, January 20th at the Flintwood Wesleyan Church. Visitation will be held on Tuesday, January 19th from 5:00-7:00 p.m. at Flintwood Wesleyan Church in Columbus, and one hour prior to the services Wednesday.

Richard D. Abraham of Columbus, Ind. went home to be with the Lord on Wednesday, January 13, 2021, leaving behind his devoted wife of 41 years, Julie M. Abraham. He was 86. Born to Rev. Paul Wunder and Mary Gleda Abraham on April 19, 1934,... View Obituary & Service Information

The family of Richard Dale Abraham created this Life Tributes page to make it easy to share your memories.

Richard D. Abraham of Columbus, Ind. went home to be with the...

Send flowers to the Abraham family.