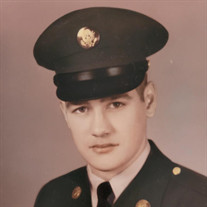 Randolph B. Rogers, age 79, a noble gentleman of Columbus, passed away April 18, 2022, at Our Hospice of Southern Indiana. Randolph B. Rogers was born on March 30, 1943, in Detroit, Michigan to William Samuel and Mary Amelia (Rabat) Rogers. After graduating from high school, he enlisted in the US Army where he proudly served his country. Upon leaving the military he followed his family to Columbus, Indiana in 1964. Affectionately known as Randy, he met and married the love of his life, Elsie Noe in 1968. Randy and Elsie spent 50 years dedicated to their love and care for one another prior to her death in 2018. Randy professed his faith in Christ and was baptized by his brother-in-law Bill Noe in 1980 at the East Columbus Christian Church. He exemplified everything that a good man should be. His love was unconditional, his patience had no end, and his compassion for others was a testament to a heart that was bigger than life itself. He brought humor and laughter to the homes and hearts of his loved ones on many occasions and often enlightened total strangers with a good laugh. His life was a testament and example to all that through determination, hard work, dedication, and one's own willpower all obstacles could be overcome. But his true strength was the love he possessed for his family. Although he never had children of his own, he cherished every moment spent with his family, especially his nieces and nephews. Randy was a lifelong reader and lover of books and the knowledge that they provided. He had a large collection of non-fiction books and shunned digital reading, preferring to hold a book in his hands and feel each page being turned. His love for history was immense and he was a huge admirer of Ernie Pyle (who they now share the same date in death), Oak Island, and anything pertaining to Vikings and the Knights Templar. Although a motorcycle accident changed his life 42 years ago, his heart still raced at the sound of a Harley and as an aviation geek, the thrill of flying in the "The Tin Goose" less than a year ago was a childhood dream come true. Being born in the Motor City he was a proud Teamster Union man like his father and uncles. He is survived by his brother and sister-in-law, Robert and Phyllis Rogers of Tallahassee, Florida, his special family members and caregivers who he cherished as his own, Rhonda Sue Foster of Louisville, and Randy Foster of Columbus, and Ron Foster of Greenwood. He is also survived by his special great-nieces Staci Bowman-Jecmen of Louisville and Jennifer Foster Nash of Virginia Beach, great-nephew Jared Foster of Greenwood, and great-great nephews Ian and Theo who brought great joy to his life in his later years, along with countless other nieces, nephews, and family members. He is preceded in death by his parents, wife, brother Gerald Rogers and sisters, Joy Williams and Frances Campa. Sister-in-law Genetta Foster and Bobbie J. Noe, and brother-in-law, Bill Noe. Graveside services will be held on Wednesday, April 20, 2022, at 11:00 am. at the Flat Rock Baptist Cemetery located at 550 N and River Road, Columbus, Indiana. Brother Steve Campbell will be officiating, and Military Rites will be performed by the Bartholomew County Veterans Honor Guard. Arrangements are being handled by Jewell-Rittman Family Funeral Home In lieu of flowers, the family is asking for donations to Friend of Ernie Pyle Development Fund, Inc., Box 345, Dana, Indiana 47847

Randolph B. Rogers, age 79, a noble gentleman of Columbus, passed away April 18, 2022, at Our Hospice of Southern Indiana. Randolph B. Rogers was born on March 30, 1943, in Detroit, Michigan to William Samuel and Mary Amelia (Rabat) Rogers.... View Obituary & Service Information

The family of Randolph B. Rogers created this Life Tributes page to make it easy to share your memories.

Randolph B. Rogers, age 79, a noble gentleman of Columbus, passed...

Send flowers to the Rogers family.