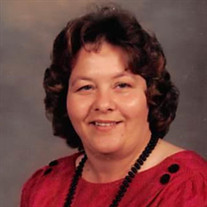 Polly Mae Hall Wyatt, 79, of Clifty Street, died at 5:03 p.m. September 12, 2020, at Columbus Regional Hospital. Polly was born April 9, 1941, in Mayking, Kentucky, the daughter of Josh and Hennie Ritter Craft Hall. In her younger years, in Neon, Kentucky, she met and married Robert Webb. Later on, in Columbus, she married the Rev. Kenneth Wyatt and he preceded her in death in 2006. For over 30 years, Polly was a member of Columbus General Baptist Church. She was a great woman of faith and her family and church were her life. Polly enjoyed canning, cooking, and feeding people. She especially enjoyed sitting at her kitchen table talking to anyone who would stop in. She was also a fan of both the Pacers and the Colts. A private funeral will be conducted at 1 p.m. Monday, September 21, 2020, at Jewell-Rittman Family Funeral Home with the Rev. Bobby Neal officiating. Calling will be 2 to 5 p.m. Sunday and one hour prior to the service Monday. Burial will be at Garland Brook Cemetery. In lieu of flowers donations can be made to Jewell-Rittman Family Funeral Home to help with final expenses. Due to the global pandemic, the family requires that all attendees wear masks and respect social distancing guidelines. Survivors include her sons, Robby (Teresa) Webb, David (Joyce) Denton, Charlie Wyatt and Steve Wyatt, all of Columbus, and Jeff Carpenter of Horse Cave, Kentucky, and daughters, Brigitte (Doug) Huddleston Elizabethtown, Lisa (Allen) Anderson of Deputy, and Lori Webb, Janice Ford and Daphne Sturgill all of Columbus; a brother, Bill Hall of Mayking, Kentucky, and sisters, Inis (Leon) Carpenter of Ocoee, Florida, Melvina (Dale) Piper of Elizabethtown, and Alice (Scott) Maggard of Mayking; 20 grandchildren; and several great-grandchildren. She was preceded in death by her parents; husband, Kenneth; sons, Rondell Wyatt and Jimmy Wyatt; brothers, Bryce Baker and Sylvan Baker; one grandchild and 3 great grandchildren. You are invited to view her video tribute, light a virtual candle, and send a message to the family via the funeral home website, www.jewellrittman.com.

The family of Polly M. Wyatt created this Life Tributes page to make it easy to share your memories.

Send flowers to the Wyatt family.