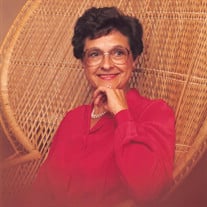 Phyllis Irene Huffman, 90, of Columbus, died at 5:40 p.m., April 29, 2021, at Our Hospice of South Central Indiana. Phyllis was born September 29, 1930 in Seymour, the daughter of William Thias and Ester (Schulte) Thias. She was married to Morris Clayton Huffman on November 25, 1951. Phyllis was a member of the Elizabethtown United Methodist Church. She worked with the youth and was a Sunday School teacher at the Burnsvillle United Methodist Church for several years. Phyllis was a long time member of Club 24 Extension Homemakers, in which she presided as president. She was also president of the Day, Arts & Crafts for many years as well. Phyllis enjoyed crafts, sewing and her grandchildren. She will be greatly missed by all who knew and loved her. The funeral will be at 10:00 a.m. Monday, May 3, 2021 at Jewell-Rittman Family Funeral Home with the Pastor Bob Lay officiating. Calling will be from 2:00 p.m. until 4:00 p.m. Sunday, May 2, 2021 at the funeral home and one hour prior to the service on Monday. Burial will be at Garland Brook Cemetery. Memorials may be made to the Elizabethtown United Methodist Church or Our Hospice of South Central Indiana. Survivors include sons, Stephen (Barb) Huffman, Gary (Christine) Huffman; grandchildren, Evan (Stacy) Huffman, Derek (Corey) Huffman, Megan (Kevin) Bozell, and Lindsay and Grant Huffman; great-grandchildren, Jacob and Nathan Huffman, Trent, Hudson and Isla Bozell; a sister, Clara Waggoner; several nieces and nephews. She was preceded in death by her husband; sisters, Dorothy Sitterding and Alma Zimmerman; a brother, Herman Thias; a great grandson, Reid Clayton Bozell. Services were entrusted to the Jewell-Rittman Family Funeral Home. Jewell – Rittman Family Funeral Home would like to thank everyone in advance for wearing masks and practicing social distancing while attending gatherings.

Phyllis Irene Huffman, 90, of Columbus, died at 5:40 p.m., April 29, 2021, at Our Hospice of South Central Indiana. Phyllis was born September 29, 1930 in Seymour, the daughter of William Thias and Ester (Schulte) Thias. She was married to... View Obituary & Service Information

The family of Phyllis Irene Huffman created this Life Tributes page to make it easy to share your memories.

Send flowers to the Huffman family.