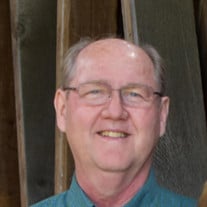 Phillip Thomas Herkamp, 71, of Columbus, passed away at 5:13 p.m. on Thursday, September 17, 2020. He fought a courageous battle with cancer since 2017 and went home to heaven surrounded by his family. He is survived by his wife, Bonnie (Seabrook) Herkamp; children, Kimberly Ann (Herkamp) Hutchinson and her husband, Karrick, and Michael Thomas Herkamp and his wife, Heather (Carhart); his grandchildren, Brooke, Shelby and Wyatt Hutchinson and Charlotte Herkamp; his siblings, Mary Ellen Adams (Norman), Nathan Herkamp (Leslie) and Joseph Herkamp (Katherine); many nieces, nephews, great-nieces and great-nephews; and several brothers- and sisters-in-law. Phil was born on June 30, 1949 in Columbus, to his parents, Oscar and Mabel (Otte) Herkamp. They preceded him in death. He married Bonnie Seabrook on July 17, 1971. The couple celebrated their 49th anniversary this summer. Phil was a graduate of Columbus High School, class of 1967. He earned a Bachelor of Science degree in mechanical engineering technology at Purdue University, and worked as a controls engineer. Phil was passionate about his work both as an engineer, and as a farmer. He continued raising corn and soybeans at the family farm in Columbus, which had been in the Herkamp family since the 1950s. He and Bonnie lived on the farm and raised Kimberly and Michael there. A man of a deep and abiding Christian faith, Phil was a longtime member of Berean Bible Church and most recently The Ridge of Columbus and volunteered with several ministries. He and Bonnie are grateful for the encouragement from the church through his illness and throughout their lives. Phil’s strength, kindness and compassion were an inspiration to his family who will continue to treasure his memory. He will be deeply missed. Public visitation 5-8 p.m. on Tuesday, September 22, with the service at 10 a.m. Wednesday, September 23 at Jewell-Rittman Family Funeral Home, 3855 25th St, Columbus. Face masks will be required for the visitation and service. Burial will follow the service at Garland Brook Cemetery. Memorial contributions may be made to Word of Life Bible Institute, 4200 Glendale Road, Pottersville, NY 12860; [email protected]; 518-494-6000. Information: www.jewellrittman.com.

Phillip Thomas Herkamp, 71, of Columbus, passed away at 5:13 p.m. on Thursday, September 17, 2020. He fought a courageous battle with cancer since 2017 and went home to heaven surrounded by his family. He is survived by his wife, Bonnie (Seabrook)... View Obituary & Service Information

The family of Phillip Thomas Herkamp created this Life Tributes page to make it easy to share your memories.

Send flowers to the Herkamp family.