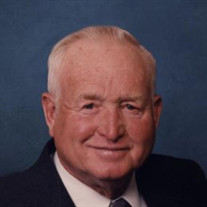 Perry Crippen, 97, of Columbus, passed away at Miller’s Merry Manor on March 29, 2022. Perry was born on September 21, 1924, the son of Zella and Oliver Crippen. Born in Brown County, Indiana he was the last living immediate relative of his family. He grew up loving farm life and animals. He never knew a stranger and enjoyed talking with friends and neighbors. In 1946, he married the love of his life, Rose Mary Denny. They were married 74 years before her passing on April 11, 2020. Perry had an infectious sense of humor and overwhelming love for his family. He joined the navy on July 20, 1943, and was stationed at Pearl Harbor. He was a fireman and was acknowledged for his courage in his part in fighting a gasoline fire involving a tank truck and R-5-D airplane that would have taken the life of the tank truck driver and the plane crew and destroyed several thousand dollars worth of property of the USN. He was also instrumental in the clean-up process after the bombing of Pearl Harbor. After his years of service, he returned to Columbus and worked for Reeves Pulley/Reliance Electric for his remaining 36 years before retiring in 1986. He is survived by his daughter, Carolyn (David) Lohr, 10 grandchildren, 18 great-grandchildren, 12 great-great-grandchildren. He was preceded in death by his parents, his wife, his 4 brothers (Kenny, James, Charles, Gerald), his son Michael Crippen, and daughter Diane Arnett. The funeral service will be at 2:00 on Friday, April 1, 2022, at Jewell-Rittman Family Funeral Home with Adam Carrigan officiating. Visitation begins at 12:00 and will end at the time of service. Graveside rights are being taken care of by the Bartholomew County Veteran’s Honor Guard. He will be laid to rest at Garland Brooke Cemetery beside his beloved Rose Mary. Memorials may be made in honor of Perry through the funeral home to Bethel Baptist Church or to the charity of your choice.

Perry Crippen, 97, of Columbus, passed away at Miller&#8217;s Merry Manor on March 29, 2022. Perry was born on September 21, 1924, the son of Zella and Oliver Crippen. Born in Brown County, Indiana he was the last living immediate relative of... View Obituary & Service Information

The family of Perry Crippen created this Life Tributes page to make it easy to share your memories.

Perry Crippen, 97, of Columbus, passed away at Miller’s Merry...

Send flowers to the Crippen family.