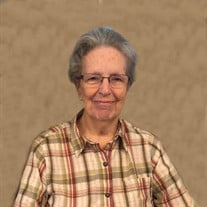 Peggy Lou McQueen Mills, 85, of Columbus, died at 6:15 a.m. July 24, 2020, at Columbus Health and Rehabilitation. Peggy was born January 7, 1935, the daughter of Robert and Mabel Sanburn McQueen. She married Samuel Lee Mills May 23, 1998; he preceded her in death August of 2012. She was a member of Bethel Wesleyan Church and a former member of Adams St. Chapel Church in Bloomington. She enjoyed playing the organ and was involved with children’s ministry. The funeral will be conducted at 11 a.m. Monday, July 27, 2020, at Bethel Wesleyan Church with the Rev. Gordon Tilley officiating. Calling will be 10 a.m. until the time of service Monday. Interment will be at 2:30 p.m. Monday at the Gross Cemetery in Whitehall, Owen County, Indiana. All visitors are required to wear face masks. Memorials may be made to Gideon's International in memory of Peggy. Survivors include her stepsons, Tim (Rosanne) Mills of Holton, Aaron (Vickie) Mills of Edinburgh, John (Leslie) Mills of Columbus, and Samuel, Jr. (Cindy) Mills of Columbus and stepdaughter, Rachel (Joe) Lustig of Columbus; brothers, Robert McQueen Jr., of Solsberry and Randall McQueen of Bloomfield, and a sister, Gloria Collier of Ellettsville; 15 grandchildren; eight great-grandchildren; one great-great-grandchild; and several nieces and nephews. She was preceded in death by her parents; husband, Samuel; and brothers, Richard and Delmar McQueen. Arrangements provided by the Jewell-Rittman Family Funeral Home. You are invited to view her video tribute, light a virtual candle and send a message to the family via the funeral home website, www.jewellrittman.com.

The family of Peggy Lou Mills created this Life Tributes page to make it easy to share your memories.

Send flowers to the Mills family.