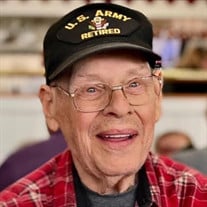 Paul N. Miner, 85, of Columbus, Indiana, died September 03, 2021, at his home. Mr. Miner was born in Remsen, New York on February 21, 1936, the son of Ray I. Miner and Ruth I. (Bronson) Baker. He married Peggy Joyce Walker on May 9, 1957 in Honolulu, Hawaii Paul spent many years serving his country in the U.S. Army. He was a decorated soldier, receiving many medals, among them being the Meritorious Service Medal, the Army Commendation Medal and the Army Achievement Medal. He also received many ribbons and accommodations for notable achievements in his 35 1/2 years of enlistment. After his retirement he continued to serve his community, volunteering as a patient companion and in the gift shop at Our Hospice of Southern Indiana. He was also a member of Post 24 American Legion and a lifetime member of the Non-Commissioned Officers Association, a lifetime member of (DAV), the past treasurer and deacon of Old Union United Church of Christ and served on the German Township Fire Department. He was also the Chaplin of the American Legion and in his spare time, he had a love for golfing with his best friend Garnett Winchester. A Memorial Service is planned for Paul at 2 p.m. Tuesday, September 7 at the Old Union United Church of Christ in Edinburgh with the Rev. Al White officiating. Calling hours will be one hour before the service. Inurnment will follow immediately after the service at the Old Union Cemetery with military honors by the Bartholomew County Veterans Honor Guard. He is survived by his wife, Peggy Miner and four daughters, Patricia June (Greg) Bishop, Pamela Jeannette Brannan, Denise Mae (Doug) Scoggan and Mary Ann Reavis (Joe McHugh), all of Columbus; 6 grandchildren and 13 great grandchildren, a brother, David (Joan) Miner of Mohawk, New York and a sister, Marilyn J. (Joel) Parker of Titusville, Florida. He was preceded in death by his father, Ray Miner; mother, Ruth Baker; brother, Phillip Miner and a sister, Patricia J. Rogers. Memorial contributions can be made to Our Hospice of South-Central Indiana. Arrangements are entrusted to Jewell-Rittman Family Funeral Home. You are invited to view his video tribute, light a virtual candle and send a message to the family via the internet. www.jewellrittman.com

The family of Paul N. Miner created this Life Tributes page to make it easy to share your memories.

Send flowers to the Miner family.