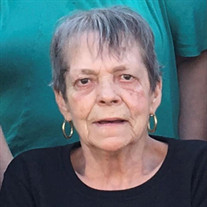 Nola Jean (Bell) Burton, 76, of Columbus, died at 4:45 a.m., Wednesday, February 10, 2021, at Otterbein Franklin Senior Life Center. Nola was born October 16, 1944 in Seymour, IN, the daughter of Forrest and Dorothy (Grinstead) Bell. She married Pete Junior Burton on July 6, 1960, He preceded her in death on October 27, 2013. Nola enjoyed watching the Cincinnati Reds and the Indiana Pacers. She was also a regular at the moose lodge for breakfast. Nola also was an avid Bingo player at the Eagles, Elks, and thirty-one Bingo. She also enjoyed going to garage sales and working outside in her flower beds. Most of all she enjoyed her grandchildren and watching them play sports, picking them up from school and spending time with them. The funeral will be private with Live Streaming made available at 2:00 p.m. by going to www.jewellrittman.com on Saturday, February 13, 2021 with Pastor Eli Johnson officiating. Calling will be from 4:00 until 8:00 p.m. Friday, February 12, at the funeral home. Due to Covid restrictions, please be advised of wearing a mask and keeping a safe distance of 6 feet during visitation hours. Burial will be at Flat Rock Baptist Cemetery, Columbus, IN. Memorials may be made to Our Hospice of South Central Indiana through the funeral home. Survivors include a son, Tony (Kim) Burton of Columbus; daughters, Lisa (Danny) James of Clifford, Connie (Bobby) Manning, of Columbus, Laura Wilson of Scipio, Heather (Jim) Lucas, of Columbus; a brother, Wayne (Linda) Bell, of Columbus; 13 grandchildren, several great grandchildren and several great, great grandchildren. She was preceded in death by her parent, her husband, and brothers, Richard, Don and Jerry Bell; and a sister, Carol Green. Services were entrusted to the Jewell ~ Rittman Family Funeral Home. Jewell ~ Rittman Family Funeral Home would like to thank everyone in advanced for wearing masks and practicing social distancing while attending gatherings.

The family of Nola Jean Burton created this Life Tributes page to make it easy to share your memories.

Send flowers to the Burton family.