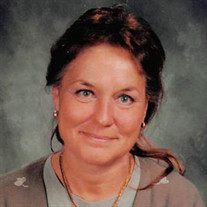 Nancy Stout Whitaker, 71, of Columbus, Indiana, passed from this life in the early hours of Monday, October 28, 2019, at her house with her family and dogs by her side. Nancy was born April 11, 1948, in Elwood, Indiana, the second daughter born to Dr. and Mrs. E. W. Stout of Tipton, Indiana. She graduated from Tipton High School in 1966 and from Indiana University in 1970. She received her Master’s degree from Indiana University in 1975 and further graduate training at the University of Connecticut and the University of Sapporo in Japan. She began her teaching career at W. D. Richards Elementary School in 1970 where she taught second grade in the same classroom until she retired in 2010. She was married to Stephen J. Whitaker July 4, 1975. They had two sons, Brandon J. Whitaker and Matthew S. Whitaker who still survive. Nancy and her husband loved to travel and see the world. They began their travels as soon as they were married. They took frequent trips for the first five years, before the children came along, and then in later years when the boys were old enough to water the dogs. Their travels included Europe, Mexico, the Caribbean and the Virgin Islands. Nancy excelled in water skiing from an early age by living on a lake in Arkansas and later having property on Lake Santee. She was also very proficient in Karate and frequently practiced on her husband. Other interests were reading, sewing, sitting by her pool in the summer time and spending hours and hours working on her day lilies. She is survived and greatly missed by her husband, Steve, of Columbus; her sons, Brandon and Matthew, both of Columbus; her sister, Judy Stout of Roswell, Georgia; her friends; and her five Old English Sheepdogs, Sophie, Bandit, Bella, Winston and Katie. A celebration of life service will be held at 10:30 a.m. Friday, November 1, 2019, at Jewell-Rittman Family Funeral Home, 3855 25th Street, Columbus, Indiana. Family and friends may call from 4:00 p.m. until 8:00 p.m. Thursday and from 9:30 a.m. until time of the service on Friday. In lieu of flowers, memorial contributions can be made to Our Hospice of South Central Indiana or the Bartholomew County Humane Society in memory of Nancy through the funeral home. You are invited to view her video tribute, light a virtual candle and send a message of condolence or a favorite memory of Nancy to the Whitaker family via the funeral home website: www.jewellrittman.com.

Nancy Stout Whitaker, 71, of Columbus, Indiana, passed from this life in the early hours of Monday, October 28, 2019, at her house with her family and dogs by her side. Nancy was born April 11, 1948, in Elwood, Indiana, the second daughter born... View Obituary & Service Information

The family of Nancy Lee Whitaker created this Life Tributes page to make it easy to share your memories.

Nancy Stout Whitaker, 71, of Columbus, Indiana, passed from this...

Send flowers to the Whitaker family.