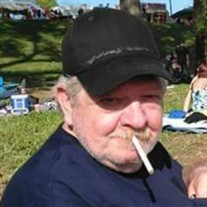 Michael Lynn "Mike" Cody, 67, of Columbus, died at 3:56 p.m. October 20, 2019, at Columbus Regional Hospital. Mike was born December 28, 1951, in Columbus, the son of James Marion and Dorothy Chafin Cody. He married Rhonda May 7, 1975, and she preceded him in death September 25, 2009. He had worked at PMG for 27 years and loved music and working on cars. The funeral will be conducted at 11 a.m. Friday, October 25, 2019, at Jewell-Rittman Family Funeral Home. Calling will be 9 a.m. until the time of service on Friday. Interment will be at Garland Brook Cemetery. Memorials may be made to Jewell-Rittman Family Funeral Home to help with final expenses. Survivors include his children, Jeremy Cody, Raelyn (William Smith) Cody-Smith and Dorissa Cody-Rowe; brother, Kerry Cody and a sister, Betty Whitis; and grandchildren, Tyler Rowe, Karlee Cody, Wyatt Cody, Brayden, Trinity Cody and Domanic Cody. He was preceded in death by his parents; wife, Rhonda; and brothers, Charles Cody, William "Bill" Cody and Bobby Cody and a sister, Rose.

The family of Micheal Lynn Cody created this Life Tributes page to make it easy to share your memories.

Send flowers to the Cody family.