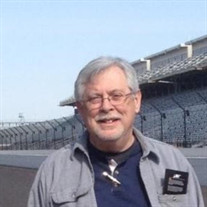 Michael Swinney born January 07, 1948 departed this life to be with his Lord on Friday, August 20, 2021 surrounded by the love of his family. Mike was born in Dayton, Ohio to Dewey and Carol Swinney. Upon the passing of Mike’s mother Carol, Dewey married Inez Ankrom. The family which included Dewey, Inez, Mike, Dale, Patricia “Pat”, Tim and Laura moved to Columbus, IN in 1965. Mike graduated from Columbus High School in 1966. As a fan of Purdue University, Mike obtained his associates degree from the Boilermakers. Mike then went on to obtain a bachelor’s degree in Electrical Engineering from Cleveland State University and a MBA from Indiana Wesleyan University. Mike was a long time employee of Reliance Electric and in his 40 years of service to them, Mike was able to travel the world and share his love of all things electrical. Mike met his sweetheart Mary Veegh in early 1971 and after impressing her with his ability to identify a plane by the sound alone, he married her on December 17, 1971. Mike and Mary had many adventures they enjoyed, with their favorite adventure being the parenting their sons Nicholas and Alexander. Though Mike loved his role as a father, when he became an Opa (grandfather) to Alexander, Emily and Zachary, Mike big heart was able to shine. Mike shared his love of Purdue, the Colts, airplanes and his love of Shelby Mustangs with his grandchildren. It was a common site to see Mike with his grandkids at a car show or at an RC club event. Mike was proceeded in death by his mother Carol, father Dewey, step-mother Inez, son Alexander and sister Pat. Mike is survived by his wife Mary Swinney, son Nick Swinney (and wife Sarah), grandchildren Alexander, Emily and Zachary Swinney, step-grandchildren Kaitlyn, Alysia, Emma and Conner McDougal, brothers Dale Ankrom (and wife Susie), Tim Swinney (and wife Donna), sister Laura Mahoney (and husband Doug) and numerous nieces and nephews. Services will be held on Tuesday August 24, 2021 at St. Peter’s Lutheran Church located at 719 5th St., Columbus, IN. Calling hours will be from 11 a.m. – 1 p.m. with the funeral service beginning at 1pm with Pastor Mark Teike officiating. Inurnment will be held at Garland Brook Cemetery Mausoleum at a later date. In lieu of flowers, please feel free to make a donation to St. Peter’s Lutheran Church in Mike’s name.

Michael Swinney born January 07, 1948 departed this life to be with his Lord on Friday, August 20, 2021 surrounded by the love of his family. Mike was born in Dayton, Ohio to Dewey and Carol Swinney. Upon the passing of Mike&#8217;s mother... View Obituary & Service Information

The family of Michael D. Swinney created this Life Tributes page to make it easy to share your memories.

Send flowers to the Swinney family.