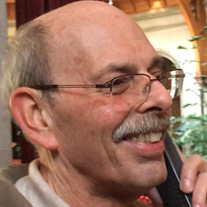 On Thursday, October 31st, 2019, Michael Fredrich Fischer, loving husband and father of four children, passed away peacefully at the age of 66. Mike was born on November 28, 1952 to Fredrich and Gertrude (Bergen) Fischer in Bakersfield, California. He went to high school in Mundelein, IL and then went on to proudly serve our country in the US Air Force as a weapons mechanic and was honorably discharged in 1978. After the service, Mike worked in the construction industry and became a project estimator. He, a dedicated professional, continued working up until a week before his passing. On June 20, 1987 , Mike married the love of his life, Victoria Harlow. Together, they had two children, Zachary Ryan and Holly Lynne. He came into the relationship with two sons, John David and Michael Joshua and with this, his family was complete. Mike absolutely adored being a husband and father. He was always there for them and loved to hear stories of what was going on in everyone’s lives. Quiet by nature, this mild mannered man was known by few but loved by all and he will be truly missed. Mike was preceded in death by his father, Fredrich. He is survived by his mother Gertrude, wife Victoria and his four children, John, Michael, Zachary and Holly. He also leaves behind his sister Chris, brother Jeff and four grandchildren: Vincent, Heidi, Alex and Bailey. The family will be holding a private celebration of life on November 9th to honor this great man.

On Thursday, October 31st, 2019, Michael Fredrich Fischer, loving husband and father of four children, passed away peacefully at the age of 66. Mike was born on November 28, 1952 to Fredrich and Gertrude (Bergen) Fischer in Bakersfield, California.... View Obituary & Service Information

The family of Michael F. Fischer created this Life Tributes page to make it easy to share your memories.

Send flowers to the Fischer family.