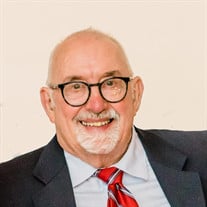 Dr. M. Gene Stevens M. Gene Stevens, DDS, age 90, of Columbus, passed away on November 2, 2019. He was born on July 17, 1929, in Corydon, Indiana, the second son of Ernest and Ellen Stevens. He is survived by his wife of 68 years, Jackie, his four children, Jackie Sue (Bill) McGinley of Fishersville, VA, Dr. James (Laurel) Stevens of Ft. Wayne, IN, Judy (Earnest) Collins of Apopka, FL, and Jody (Doug) Evans of Columbus, IN, 11 grandchildren and 15 great-grandchildren. He was preceded in death by one child, Janet Holtkamp of Columbus, IN. Gene graduated from Shields High School in Seymour Indiana in 1946. He went on to Franklin College where he was first in his family to obtain a college degree in 1951. He financed his education working as a licensed chicken-sexer in various hatcheries in Southern Indiana. He completed his dentistry degree in 1955 at the IU School of Dentistry. He went on to practice at the Donaldson Air Force Base in Greenville, SC from 1955-1957, then moved to Columbus, IN where he opened his dental practice which he continued until his retirement in 1998. He served in various community and state leadership positions, including as President of the Indiana Dental Association in 1977-1978. After retirement, Gene enjoyed an active second career in woodworking, making furniture, toys, and artwork for family and the local community. He was very proud of his family, highly valued education, and was known for his sharp sense of humor, storytelling, and love of laughter. A funeral Service will be held at the Four Seasons Chapel at 1901 Taylor Road, on November 9, 2019 at 1:00 pm. A reception is to follow immediately afterward.

The family of Dr. Melvin Gene Stevens created this Life Tributes page to make it easy to share your memories.

Send flowers to the Stevens family.