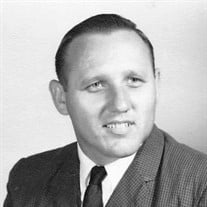 Melvin Lyle Roberts, 84, of Columbus, passed away at November 29, 2021 at Columbus Regional Hospital. Melvin was born February 9, 1937 in Columbus, the son of Charles T. and Lucy F. Graham Roberts. He met the love of his life, Caroline Purdue, 67 years ago. Melvin and Caroline were wed on July 24, 1959, and every day for the rest of his life, where one was found, the other was not far behind. Melvin was a supply clerk for the U.S. Army during the Vietnam Conflict and retired from Dorel Juvenile Group after 40 plus years of service as a tool repair specialist. He enjoyed playing guitar, and each week, he would gather with a group of friends to play music together. When his children were younger, every Sunday Melvin would play music for his family. He was an avid golfer, and bowled in several leagues throughout his life. Melvin played in softball leagues with his brothers for 47 years, and on November 9, 2021, Melvin was inducted to the Columbus Indiana Slow Pitch Hall of Fame. He coached softball for 53 years, and when his sons were younger, he coached teams for little league baseball as well as basketball at the Boys Club. Melvin is survived by his wife of 63 years; his children Kathy Jo (Doug) Smith, Melvin Wayne (Karen) Roberts, and Delvin Shane (Beverly) Roberts all of Columbus; grandchildren Daniel, Alan, and Jordan Roberts, Miranda Giles, Bailey Weeks, Sawyer Smith, and Adelina Smith; 14 great-grandchildren; brothers Gene (Minnie) Roberts and Charles (Bonnie) Roberts both of Columbus; as well as a sister Mary (Rich) Roessler of Scipio. He was preceded in death by his parents; a brother Steven Wayne Roberts as well as a sister Carolyn Lucas. The funeral will be at 1:00 p.m. Monday December 6, 2021 at the Jewell – Rittman Family Funeral Home with Rev. Ancel Harden officiating. Military Rites will be performed by the Bartholomew County Veterans Honor Guard. Visitation will be from 1:00 p.m. until 5:00 p.m. Sunday, December 5, 2021 and one hour prior to the service Monday. Burial will be at Garland Brook Cemetery. Memorials may be made to Our Hospice of South Central Indiana.

Melvin Lyle Roberts, 84, of Columbus, passed away at November 29, 2021 at Columbus Regional Hospital. Melvin was born February 9, 1937 in Columbus, the son of Charles T. and Lucy F. Graham Roberts. He met the love of his life, Caroline Purdue,... View Obituary & Service Information

The family of Melvin Lyle Roberts created this Life Tributes page to make it easy to share your memories.

Melvin Lyle Roberts, 84, of Columbus, passed away at November...

Send flowers to the Roberts family.