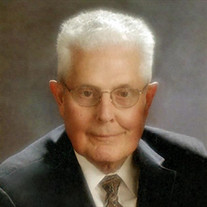 Max Roderick “Rod” Williamson, 89, of Elizabethtown, passed away November 1, 2019, at his home. The first of four children, Rod was born August 7, 1930, on the family farm in southern Brown County between the communities of Story and Stone Head. His parents were Noel “Burr” and Goldie Ellen Wilkerson Williamson. Mr. Williamson’s family was among the most prominent in Brown County a half-century ago. His great-grandfather was the publisher of the Brown County Democrat, his grandfather served as Brown County Clerk, his father taught in a one room schoolhouse in Van Buren Township and Rod was the nephew of the famed author and artist Lennis L. “Von” Williamson. He married Maxine Joan Kohler on May 24, 1952. Rod graduated from Van Buren High School in Brown County in 1948. After graduating from high school, Rod enlisted in the United States Air Force. While in the Air Force, he served at early warning radar sites in the state of Washington and in Japan. Rod was discharged in 1954, attaining the rank of Staff Sergeant. After proudly serving our country, Rod was employed at Cummins Engine Company from 1954 until his retirement in 2001. He served many roles in several areas during his time at Cummins. He started as a draftsman, and then graduated from Purdue University in 1959 attaining a BS degree in Mechanical Engineering. After graduating from Purdue, he served in Product Engineering Design Standards Department, Service Department, a Service Engineer, Regional Service Manager, National Accounts – Forrest Industries Sales Manager, and finally Area Service Manager for the Eastern and Southern divisions. In 1985, Rod joined Ivy Tech as Automotive and Diesel Program Chair, and the following years, he was employed with Cummins Mid States. He was an avid outdoorsman, and was never more at home then when he was fishing or roaming the hills of Brown County. Survivors include a daughter, Rhonda L. Williamson of Keyport, Washington, and a son, Scott J. Williamson of Berkley, California; as well as several cousins, nieces, and nephews. He was preceded in death by his parents; his wife, Maxine on September 24, 2019; as well as his daughter, Twila K. Williamson; brothers, Edgar Lee Williamson, Ron Williamson, and Dave Williamson; and a sister, Donna Morris. The funeral will be at 11:00 a.m. Saturday, November 9, 2019, at Grace Lutheran Church with the Rev. John Armstrong officiating. Calling will be from 10:00 until time of services at the church. Military Rites will be performed by the Bartholomew County Veterans Honor Guard at the church. Burial will be at 1:45 p.m. in Mt. Zion Cemetery in Brown County. Memorials may be made to the Mt. Zion Cemetery Association in honor of Rod.

Max Roderick &#8220;Rod&#8221; Williamson, 89, of Elizabethtown, passed away November 1, 2019, at his home. The first of four children, Rod was born August 7, 1930, on the family farm in southern Brown County between the communities of Story... View Obituary & Service Information

The family of Max Roderick “Rod” Williamson created this Life Tributes page to make it easy to share your memories.

Send flowers to the Williamson family.