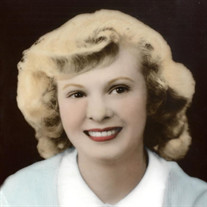 Mary Louise “Mickey” Staggs, 87, of Carriage Drive, died in her home at 2:55 p.m. Saturday, June 12, 2021. Mrs. Staggs was born in Upton, Kentucky, on September 28, 1933, the daughter of Fred Lee and Stella Mae Priddy. She married Harold Eugene Staggs on July 5, 1952. The couple had two sons, Dennis, who passed away in 1997, and Tim, who survives. They also had five grandchildren: Dylan, Troy, Kennedy, Grace, and Olivia, as well as five great-grandchildren, all of whom survive, with one more on the way. Mrs. Staggs worked for much of her life at Arvin Industries in Columbus. Since 1972, she was a homemaker, spending her time over the years with children and grandchildren. Neighbors could always find her working in the yard, usually wearing a winter coat and hat even in 90-degree weather. In recent years, she mostly concerned herself with the fact her grandkids apparently could not afford jeans without holes in them. Mrs. Staggs was also survived by her sisters, Inita Smith of Columbus and Judy Preston of Elizabethtown. She was preceded in death by her parents; her husband, Harold; her son, Dennis; and her two brothers, Larry and Freddie Priddy. Services will be held at 1:00 P.M. Thursday, June 17, 2021, in Jewell ~ Rittman Family Funeral Home with Dinah Staggs officiating. Following the service, she will be laid to rest next to her husband Harold in Garland Brook Cemetery. Visitation will begin at 11:00 a.m. Thursday at the funeral home. In lieu of flowers, the family has requested for memorial contributions to be made to Our Hospice of South Central Indiana or the Alzheimer’s Association. You are invited to view her video tribute, light a virtual candle of remembrance and send a message of condolence to the Staggs family via the funeral home website: www.jewellrittman.com.

The family of Mary Louise "Mickey" Staggs created this Life Tributes page to make it easy to share your memories.

Send flowers to the Staggs family.